it's crap! In a funky skillo sort of a way.
Myke-P
Challenges, Crap Games
2 Comments

Back in 1999 – in CSSCGC #4 – Derek Jolly created “Think of a Number,” in which the player was invited to guess a number between 1 and 100. Upon its release one C&VG reviewer famously choked on a can of Tizer IceTM!

Over the years people have tried in vain to repeat that success with increasingly convoluted variations on the same theme;

This year it’s Simon Ferré’s turn to give the old formula a new airing. Future Publishing have confiscated everyone’s soft drink cans as a precaution.

In Blobby, Mr. the (bright pink) screen fills with a random number of yellow blobs (the game’s one and only UDG) acting as a visual, but unwelcome, reminder of the titular 90s Saturday Night ‘Entertainer.’ Your job is simply to guess how many there are.

How many blobs, Mr?

Whether you attempt to count the blobs on the screen (Tipshop says: I wouldn’t bother, if I were you,) or just take a wild stab in the dark, chances are you’ll be wrong and you’ll be seeing a lot of this screen*.

* Simon has (expertly) managed to get this screen-filling effect to go on for just the right amount of time to get on your nerves. 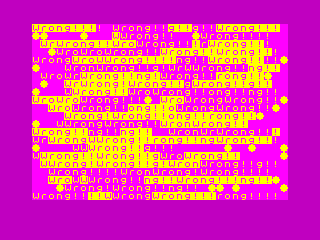 But if you think that’s all there is to this game… you’re Wrong!!

Monsieur Ferré has also, whether intentionally or not, managed to enter not one, but two Sqij Tower Challenges simultaneously… “How” you may ask? Behold…!

Firstly this is, albeit very subtly, an homage to Blood’s CSSCGC #1 entry; “Mr Blobby Goes Down the Newsagents*.” He’s sensibly dispensed with all the playable elements of Blood’s original, however, Simon has recreated the end sequence with painstaking accuracy.

* Which, we finally confirmed last year, was also previously entered into Sinclair User’s Worst Game in the World compo! 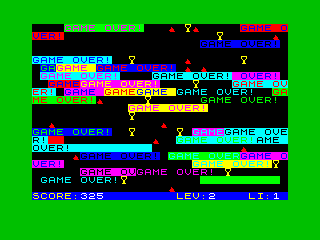 “Mr Blobby Goes Down the Newsagents” by Blood

Secondly, substituting rocks for blobs, surely this also qualifies as a remake of Dr.Sputnik’s “Rocks: Count Them!” from last year’s compo – albeit without the drunk guys?

Not content with a double-hit in challenge #1, however, Simon has also managed to enter the latest Sqij Challenge based on his own Crap Idea Generator* entry from earlier this year. 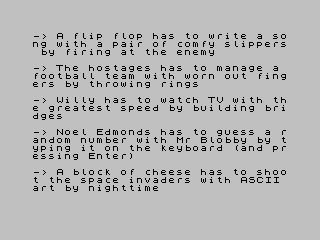 Nostradamus would have soiled himself!

In conclusion, against all odds, this simple entry turns out to be rich and rewarding CSSCGC experience.

All it needs is a loading SCREEN$ featuring the bearded Deal or No Deal star, possibly mooning us with his Crinkley Bottom for maximum ‘comedy’ value, and I think we’d have had a winner.