I can’t REMember IF this is a NEW idea OR if it’s BIN done beFORe – have a PEEK at the Keyword ChalLENge!

When saving a game to tape on the ZX Spectrum, you only get 10 bytes in which to name your file. Which is fine if it’s called “INVADERS” or “ZAP-A-BUG”, but not so useful if it’s “ETHEL THE AARDVARK GOES QUANTITY SURVEYING”. Well, there’s a clever way round this – keywords!

There are 86 keywords in BASIC, and each keyword counts as one byte – so with a bit of jigging about, and occasional use of the backspace command – CHR$ 8 – to allow for odd spaces, you can have a filename that appears much longer. Here’s some familiar games that could’ve used this technique if only somebody had thought of it at the time:

In fact the only games I can think of that used this trick are a handful published by Virgin Games, which had a flashing FLASH LOADER (or FLASH LOAD) printed over the top of the usual “Program:” text, and the introduction bit to Firebird’s Savage, which has a filename called “LOAD MAIN CODE DATA IN”: 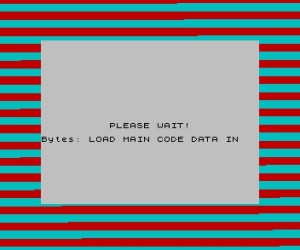 Clever, huh? So your challenge, crap gamers, is to come up with a game with a filename that is also the entire title of your game. The rules are as follows:

Confused? Well, here’s some examples, which you can use as game ideas if you so wish:

Naughty Step (NAUGHTY/ STEP) – politically correct version of Jack The Nipper for the 2010s, with some stairs replacing a smacked bottom as punishment

Flash Dog Ron (FLASH /D/O/G/ /R/O/N) – a bit like Flash Gordon, but about a dog called Ron for copyright purposes