Andrew Green opened last year’s competition with a bit of a programming gaff that meant only the most dedicated of csscgc-ers would see his game’s (literally) blinding opening sequence.

He’s not making that mistake again and has cleverly left the snapshot file provided at a RUN prompt – all you need to do is tap [Enter] and the show can begin! 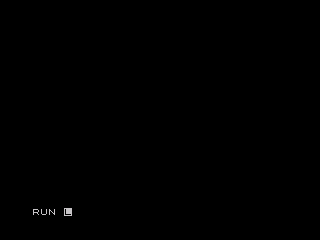 Andrew’s title screen is rendered predominantly in Chunk-o-vision™ and augmented with a number of strategically placed diagonal lines and some painfully slow-to-draw concentric circles.

You get to see this display every time you restart the game and, to me at least, was reminiscent of the boss’ Christmas jokes – mildly entertaining the first time around and increasingly grating with each subsequent experience. 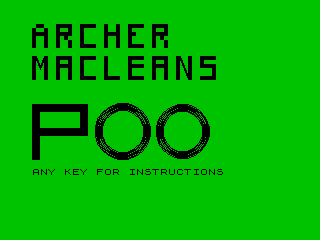 Archer Maclean, in case you’re wondering, is responsible for some pretty great games; Dropzone, IK+, the ‘Jimmy White’ series and, of course, his self-titled; “Pool” simulation.

All that time hunched over a keyboard on an 80s office chair, however, has taken it’s toll and he is now suffering from a painful case of the old Chalfonts*.

A quick introductory text (to that effect) and it’s onto the game proper; you ‘control’ the red brick – here representing the titular poo – and, if I interpret the rest correctly, those ‘crystal blue waters’ are actually a reservoir of stomach acid caused by the falling yellow blobs? Nice.

I’m no doctor, however, I’ve an inkling that Archer should be even more concerned about faecal matter passing up though his stomach (rather than down through his intestines) than the throbbing pain between his buttocks?

Medical questions aside, however, your job is to judge the optimal time to propel Archer’s stool across the screen by way of the Space Bar.

* Ask your Dad and watch him wince. 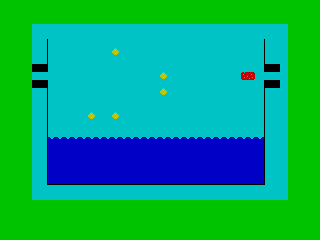 As it makes its way across the screen the acid drops fall in a largely unpredictable  manner which show complete disregard for the laws of gravity.

If you collide with one it’s a prompt Game Over, however, make it to the other side (by pure luck, natch – Ed) then congratulations are in order. Huzzah!

Subsequent level brings more and more acid drops, and an inversely proportional drop in ‘framerate,’ as you mash the Space Bar in the vain hope of a response. 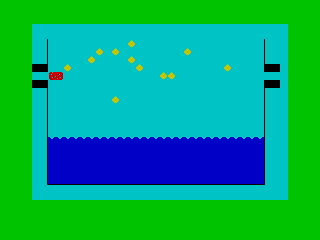 Andrew believes that this game has a “hypnotic quality” that makes you “want to see how far you can go” and, as I sat playing it on the bog, I certainly felt relaxed so I guess that counts as an endorsement?

The High Score Challenge is set at level 9 and, looking at the BASIC, there are 25 of them to get through** before Archer can finally sit down comfortably to a happy New Year.

** Although, at this point, your Spectrum will be screaming in agony on the floor as its Z80 processor melts. 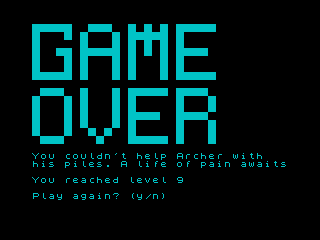 You didn’t make it!

Score: Crap on so many levels!

It is well known that in the late 1980s the Japanese game company Taito made a slight error with one of their titles, releasing an F1 racer called “Continental Circus” after a poor translation of “Continental Circuit”. It was an easy mistake to make, I mean, the S key is right next to the IT key on Japanese keyboards.

Taito (back then, known as Potaito) had developed what they thought was bound to be the next big thing in gaming – two player head-to-head motor racing with bladder control. Literally. A pair of huge arcade cabinets, each housing a large screen, a reclining chair, a steering wheel, foot pedals, and a number of straps and sensors that needed to be attached to the player. A drinking fountain was angled towards the player’s mouth, and after inserting a few 100 Yen coins, the game began.

Much like in most other motor racing games, the aim was to win the race, but the twist with Incontinental Circuit was that your car’s engine power increased as you, the player, physically filled their bladder. The more you drank, the higher your vehicle’s top speed. Don’t drink, and your car loses power. The first to pass the Chequered Flag was the winner, the first to pass urine was disqualified. That’s right – moisture sensors in the seat would alert the game to your embarrassing release.

Unfortunately for Potaito, they were hit from all sides with issues. The main one that hit the headlines was over gamers sitting in a pool of other peoples’ fluids as arcade staff failed to mop up after disqualifications, and all the associated health risks that came with it. This was the 1980s, remember, and popular myth at the time was how easy it was to contract AIDS from arcade machines. Other problems just made things worse. The water fountains needed to be connected to a water supply, which was something most arcades struggled to accommodate. All that water (and “previously drunk” water) in close proximity to electricity caused several shocking deaths, and one unfortunate individual managed to drown when his water fountain malfunctioned and he couldn’t get out of the seat straps quickly enough.

What really killed the game off, however, was the cheating. Players soon found that by wearing adult nappies, they could thwart the sensors and wet themselves all they liked without the game noticing.

With the game an expensive flop (all those proprietary and unusual components almost bankrupted Potaito before the cabinets even hit the arcades), Potaito gutted the core game and repurposed it as a more standard F1 racing game. No water, drinking or sensors. They called it Continental Circuit, but somehow the same translator made the same mistake again. He never found translating work after that, and the entire fiasco was blamed on him and him alone.

Welcome to the 20th comp.sys.sinclair Crap Games Competition. We are now  closed for business (as in “Urgh, the dog’s done his business on the carpet!”)

Thanks for all the crap games – we’ll do a proper round-up once all the games have been reviewed.