it's crap! In a funky skillo sort of a way.
leespoons
Challenges, Crap Games
10 Comments

MatGubbins returns with the last Keyword Challenge entry for now (although apparently he has about 70 more ideas waiting in the wings), based around maths – yes, you heard me correctly. It’s reminiscent of all those dull-as-ditchwater educational games your parents used to buy at Christmas “to help with your homework“, which you loaded up precisely once to keep Mum happy, before going back to more exciting stuff like Captain Kill-O-Zap Blasts The Aliens or something. I was a bit of a geek at school and quite liked maths, but once we were allowed to use calculators and spent whole lessons typing in 81980085 there wasn’t much point in learning how to do long division, and I only lasted a year in A-level maths before ditching it for a far more useful subject – sociology. Stop laughing. 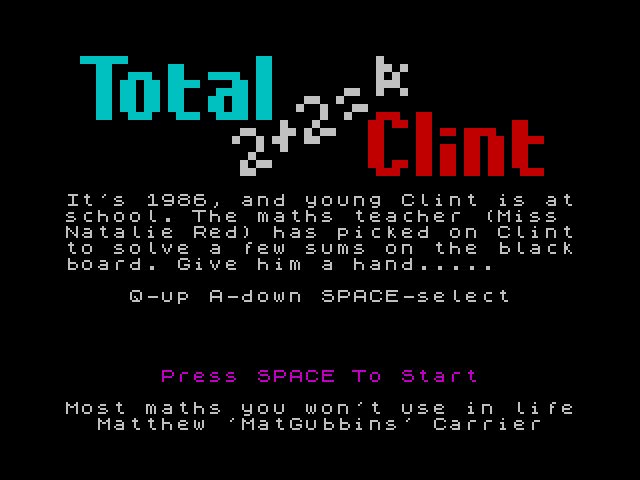 The usual Chunk-O-Vision (can’t remember the code for the trademark symbol) title appears. It’s 1986, Clint’s back at school, and he’s been singled out by the teacher to solve some maths problems. Don’t you hate it when that happens? You sit there at the back of the class, trying to look as inconspicuous as possible without staring out of the window too much, sending subliminal messages to the teacher: “Don’t pick me, pick Gary!” It never worked though. Now I always thought “sums” meant addition, but there’s also some division and multiplication thrown in, which made my brain go into meltdown… 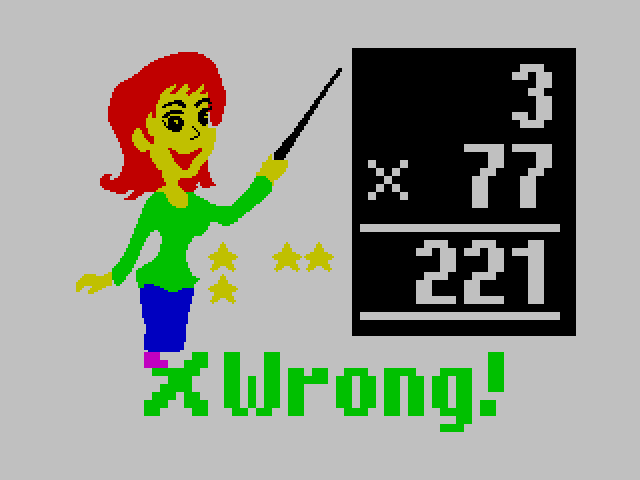 Mat has devised a cunning way to input the number. Rather than simply typing it, you use the Q and A keys for up and down, you start with the lowest number (units), then press Space to move on to the tens, and so on. This all reminds me of the SMP – Scottish Maths Project – which I seem to remember placed great emphasis on thousands, hundreds, tens and units, and for some unearthly reason was forced upon the children of Bedfordshire in the early ’80s, despite Bedfordshire being closer to Belgium and France than Scotland (citation needed). This also means that there’s no way of starting again if you get it wrong… and I had lots of practice at getting it wrong. 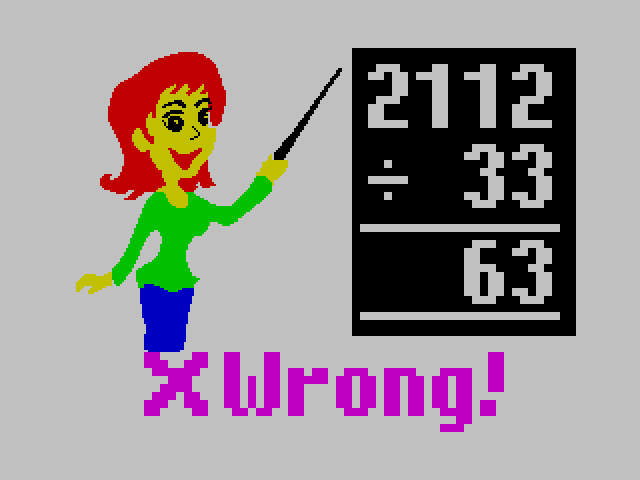 One redeeming feature is the rather fetching (and not remotely Chunk-O-Vision) Miss Natalie Red – if she’s based on one of Mat’s teachers from thirty-odd years ago, then all I have to say is lucky old Mat. My maths teacher in 1986 was 57 years old, completely bald, and had a luxuriant handlebar moustache. I think she’s retired now though.

To be fair, this is all very well programmed (I think there may even be some machine code involved) and it did make me use my brain, feeble though it may be. But just like those educational games from back in the day, I don’t think I could ever bring myself to play this again. Now where did I put my copy of Captain Kill-O-Zap Blasts The Aliens?