Here’s Sqij Towers’ very own deKay with his first entry of the year – BEEP – which is disqualified from being a keyword challenge entry because the filename’s too short – try BEEP BEEP BEEP next time! A veteran of the Speccy scene, deKay (real name Andy, a dodgy moniker if ever I heard one) didn’t include much in the way of instructions with his entry, so I didn’t know what I was in for until I loaded the game. However he did stick the whole thing on GitHub, wondering in the process how many other Speccy games are on there (answer – nobody cares), and thereby gaining a whole ton of geek points. I was also pleased to see a proper loading screen, which took five times as long to load as the BASIC game – rather than displaying it here I’ll let you discover how wonderful it is for yourself (this is because I couldn’t be bothered to turn off all the auto-load stuff in Fuse to save a .png of it, and Spectaculator, which I use when I want the full loading experience, only saves .bmp files, which WordPress won’t display and I couldn’t be bothered to convert) 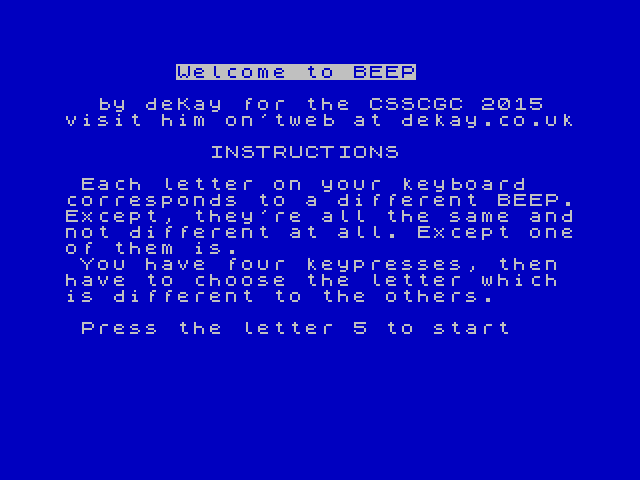 No spurious back-story or badly-drawn sausages on legs here, this looks like a game that does exactly what it says on the tin… erm, inlay. If there was one. From the instructions: “Each letter on your keyboard corresponds to a different BEEP. Except, they’re all the same and not different at all. Except one of them is.” This all sounds woollier than a Liberal Democrat’s Christmas jumper so far. Oh, and you have to press the “letter 5” to start. I do this, and am prompted to press a letter key. I immediately press the “letter 5” again, in case deKay’s strange idea of a letter still includes numbers, but to no avail. So, thinking logically for once, I start at the beginning with “a” and get a BEEP. Then “b” (BEEP),  “c” (slightly higher-pitched BEEP) and “d” (BEEP). So which letter is the odd BEEP out? It’s “c” of course! Yay, I win! 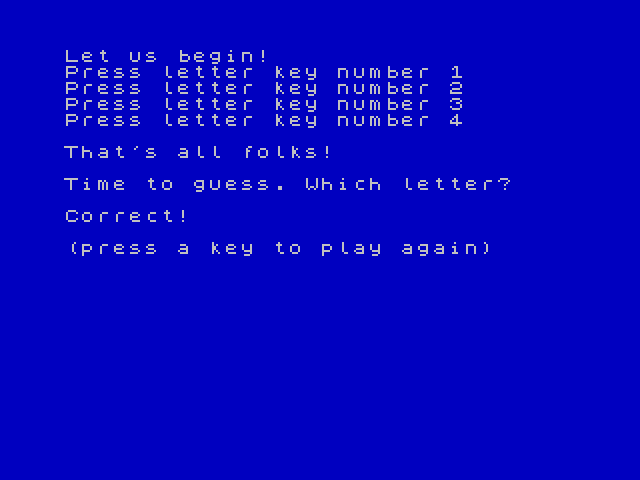 As is proving to be the case with a lot of these chance/blind luck/RANDOMIZEd games, this was a sheer fluke. On my next 76 goes I failed to identify the different-sounding BEEP, because it was hiding under one of the 22 letters I didn’t press, every single time! I got so annoyed at this that I immediately transferred the game to a C15 cassette so I could smash it to bits with a toffee hammer before throwing it out of the window onto a huge bonfire of cat shit and discarded Bros albums. Aaaaaaaaaaargh! 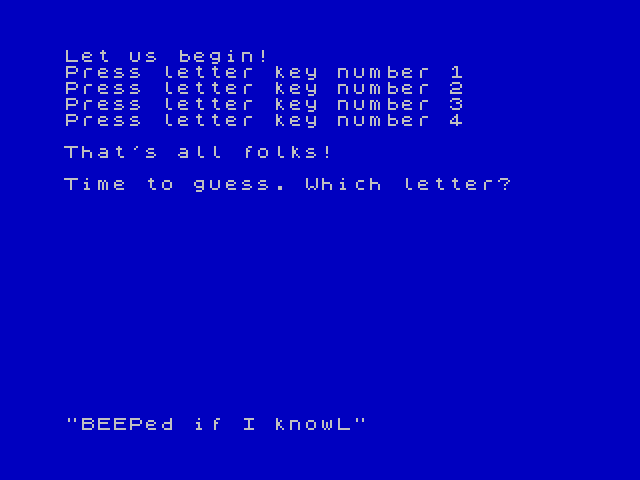 As you still seem to be reading this, I can only assume you have a first class degree in Masochism and Gluttony for Punishment from the University of North-East Milton Keynes (formerly Newport Pagnell College for Duffers)… in which case this is the BEEPing game for you!

Download .zip file (and don’t get excited, there’s only a .tap in there) here