So the competition’s been running for a few weeks now, and we’re already up to 30 entries, with lots more still on the dung heap and a whole nine months left to go – yikes! But what about those of you who want to produce a crap game but find yourselves lacking in inspiration? Fear not! This great utility from Simon “Simon Ferré” Ferré takes the hard work out of game design by coming up with the idea, leaving you to concentrate on the actual gameplay: 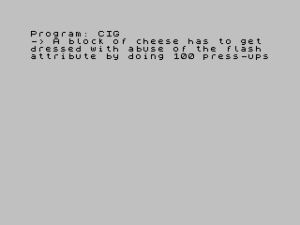 It’s a simple principle, a something has to do something with something by doing something. However with over 50 RANDOMIZEd somethings for each something (Or something. Ed.) the crap game possibilities are almost endless, as you’ll see in the forthcoming screenshots – and I really liked the name of the variables used to construct the game ideas – i$, d$, e$ and a$! 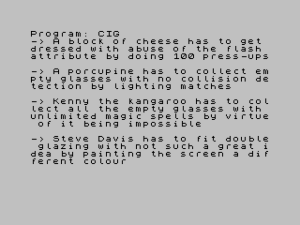 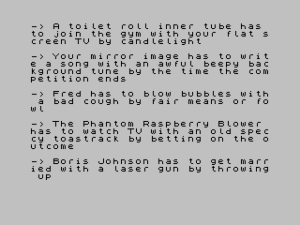 …only 250-odd words? Bugger, that’s not even two tweets’ worth. Perhaps I’ll write a poem to bulk it out a bit more. There was a young fellow called Tucker, whose girlfriend was a chicken plucker. Whilst having a punt*, he opened her (picnic basket. Ed), and promptly proceeded to (have a nice cup of tea and a couple of cucumber and bloater-paste sandwiches with the crusts cut off. Ed).  Is that 500 words yet? Oh, that’ll do. 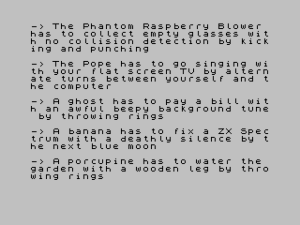 So at some point I’ll be setting the CIG challenge… although with potentially over 7 million different crap game ideas, I may live to regret it! 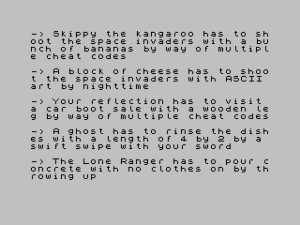 *A punt down the Cam (a river in Cambridge), in a punt (a type of boat which you punt along). I was really struggling to think of anything else that rhymed with “picnic basket”.