Stephen Hawking: A brilliant mind, trapped in a barely functioning body, with the voice of a robot. This may sound like the trailer for next summer’s sci-fi blockbuster (read it again in your best “trailer voiceover man” voice, preferably loudly if you’re on the bus or something), but this is science fact, not science fiction. 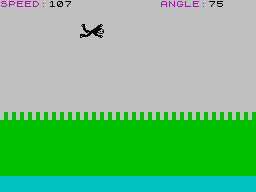 Is it a bird? Is it a plane? No, it’s Stephen Hawking!

The UK’s second favourite professor is the leading authority on black holes, although it was Einstein who originally predicted their existence, before fudging the equations as he believed them impossible. Black holes are strange creatures. So strange, in fact, that they aren’t actually creatures at all. You couldn’t keep one as a pet. Well, you could, but it would – quite literally – eat you out of house and home planet. 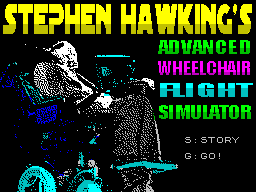 The UK’s favourite professor is Brian Cox (not pictured)

Black holes are virtually impossible to detect. This is partly because they emit no light, and partly because space and time are intertwined, and massive objects like black holes warp this. If you look at a black hole invariably you’ll see what is behind it, due to an effect known as gravitational lensing. If you get really close to a black hole time slows down. If you get even closer, time will stop. By that point you would have had your atoms torn apart by the excessive gravity so you’d never actually experience this. 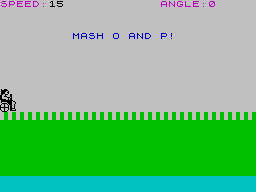 In Stephen Hawking’s Advanced Wheelchair Flight Simulator by Paul Weller…. Yes, that’s right. In between embarking on a national tour and promoting his new album (Saturn’s Pattern, out May 11th), the Modfather likes nothing more than writing crap games for his favourite 1980s computer (I think this is why he prefers us to call him “sunteam” – Ed). Thankfully the former The Jam singer managed to sneak this in before Stephen Hawking trademarked his own name, so the legal bill should be reduced. 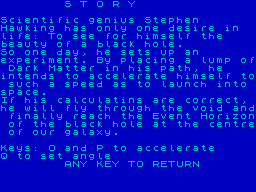 Anyway, the plot goes that the robotic professor is trying to get up close and personal with the black hole at the centre of our galaxy. There is a theory that everything sucked in by a black hole is spat out into a parallel universe. I’m not sure if this is what he is trying to achieve here, it isn’t really adequately explained. It’s also not explained why he doesn’t use a rocket to escape the Earth’s gravity, as a lump of dark matter is unlikely to provide the propulsion needed – especially as nobody really knows what dark matter is, not even Stephen Hawking knows, and you’d think he would do some research first if he’s going to be utilising such a thing. Anti-matter would possibly be a more useful propellent, as it might cause a massive emission of energy before the matter of the young scientist and the lump of anti-matter cause neither to continue to exist. 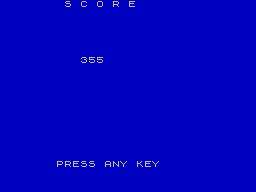 Basically it’s a button-masher. I would explain more but we’ve run out of space-time. How inconvenient.