In the words of Edwin Starr: “Rain. Hurgh! What is it good for?” Absolutely bloody nothing, that’s what. All it ever does is make you wet (in a non-f’narr f’narr sort of a way), and it always turns up at the exact point when you’ve got the washing out/barbecue going/whole way to the nearest beach. Yes, I know it’s probably pretty useful for making things grow and stuff, but most of the time I wish it would just sod off and leave us all alone.

However, a recent study by Professor Bertie Ollocks from Merda-Taurorum University suggests that 90% of the planet will be uninhabitable desert by the year 2016. So the one thing that defines Britain and the British – incessant bloody rain, every second or third day from the first of January to the last of December – could very soon become a thing of the past. In which case, as we sit there dying of thirst and stinking of B.O. we’ll start moaning (for the other thing that defines Britain and the British is incessant bloody moaning) that we’d quite like it to rain now, please, just a little bit, from midnight to 6am every week-night, if it’s not too much trouble, but not this Thursday because we’re going to the cinema and it doesn’t finish until five past twelve and we don’t want to get soaked on the way back to the car. 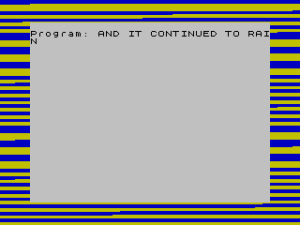 I almost forgot I was supposed to be reviewing this thing from MatGubbins. Here we have the longest keyword challenge name yet, apart from RANDOMIZE RANDOMIZE RAN(Oh Gawd, don’t start all that again. Ed.), as well as a nice bit of word un-wrapping. Crap points ahoy!

There follows one of Mat’s trademark Chunk-o-vision™ screens, and a charmingly titled block of machine code: 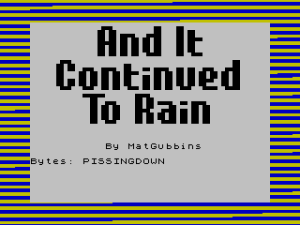 And then… well, I won’t completely spoil the surprise, but let’s just say that this program does exactly what you’d expect a program called “And It Continued To Rain” to do. The joke wore off quicker than I could google “Supertramp – It’s Raining Again”, but I was vaguely impressed by the use of a machine code routine which meant I couldn’t break out of the thing at all. And if you’ve got no idea what “rain” is because you’ve spent your whole life somewhere nice and sunny, like Spain, Australia or the surface of the sun, or if Professor Ollocks’s predictions for next year turn out to be true, then this is the advanced crappy British weather simulator for you!

Score: 972 millibars out of an occluded front. Whatever that means.