it's crap! In a funky skillo sort of a way.
Chris
Crap Games
9 Comments

The only chicken-based relative I’m aware of is Knife from Knife and Wife. Oh, and there’s Mr Chicken of course, who may or may not be related to unclechicken, although I strongly suspect Mr Chicken would cook unclechicken and put him in a burger were he forced to play BEEF II, and not purely because as a chicken merchant he would be unhappy to play a game where the player’s character’s name is based on his arch-nemesis food product. 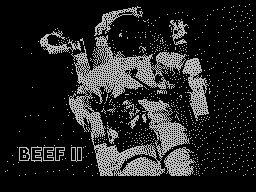 After a brief departure into playability and sensible keyboard controls for BEEF!, unclechicken has regained at least some of his lost sanity for the sequel, which picks up a few minutes after the first game left off.

Upon loading, the author’s now trademark “custom font with slightly ambiguous plot” title screen appears, and pressing a key gets you straight into the heart of the action… at which point you’ll die trying to figure out how to use the key controls even a masochist would write a letter of complaint about. 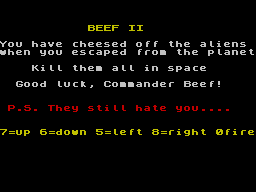 This is the only splash of colour you’ll see – the game is entirely “black & white TV compatible”.

It’s a sideways scrolling shooter, like R-Type, although actually nothing like R-Type which I’ve done a disservice to by even mentioning it in the same sentence. Instead I will compare it to my fifteen-year-old effort Mothership One, which I can’t be arsed to load back up, but my memory tells me was appalling (although technically it wasn’t a *scrolling* shoot-’em-up), and at least I remember it unlike a lot of the CSSCGC entries I’ve apparently submitted over the years. 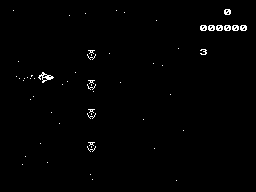 The aliens have cunningly disguised themselves as priceless ming vases.

Sooo… you know the drill with these games. You get a puny pea-shooter with a spaceship attached to it and are expected to take down wave after wave of ships sent by an alien civilisation whose economy and defence budget isn’t in the toilet like ours (note to potential invading nations: our army is the best in the world, don’t even think about it). And the reason you’re attacking them? Well, usually it appears to be just for the hell of it, something to do on a Sunday afternoon:
“What shall we do Tarquin?”
“Let’s borrow Daddy’s spaceship and take down some Jerrys*, Elizabeth, and then celebrate with tea and scones.”
“Oh, Tarquin! Mother will be most proud if we get our photograph on the front page of the Biggleswade Chronicle! We must set off at once!”
(etc.) 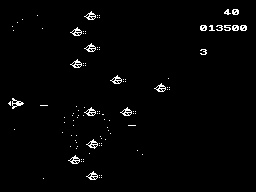 The particle effects are pretty good.

In this game, however, you’re being chased by the aliens who hate you, because leaving the planet in BEEF! cheesed them off, and they’ve clearly sent for reinforcements, as they all appear in front of your ship rather than shooting from behind. Other than that, it’s business as usual – identical attack wave after identical attack wave of enemy ships who can kill you just by being vaguely in the vicinity of your ship (and bizarrely appear to have no guns, so they just kamikaze into you), but if you try to shoot at them you discover there’s about a three second delay between pressing fire and actually seeing any, erm, fire. Couple that with the insane finger gymnastics and you’re going to fly straight into them anyway. And, just as in Mrs Pickford, you don’t get a chance to see your score before you are rudely thrown back to the title screen, and then back into the game and then shot at or flown into or crashed and back to the title screen, and those aliens are getting on your wick now and you don’t remember what it was that made them hate you but it probably has something to do with chickens not getting on with cattle, and they’re going to hate you even more once you manage to get your fingers in the right place to both control the spaceship and shoot at them, and maybe it’ll be easier if you get Jeeves in here to hold down the shooty thing whilst you concentrate on not flying into the alien coming right at you and…. Elizabeth, dear sister, is that a gentleman from the press at the door? 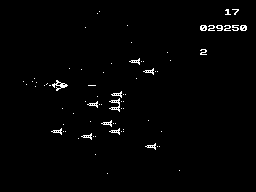 There’s another wave after this then you’re done.

* or whatever the correct colloquial term for aliens is