it's crap! In a funky skillo sort of a way.
Chris
Crap Games
8 Comments

So… it’s Bank Holiday weekend, Sunday afternoon and I’m at a loose end already. I could write some crap games to annoy Lee with, but I don’t have any inspiration for that sort of thing at the moment. I could help Lee out and review one of the games on the pile. Preferably the one at the top, as if I remove the one that has been sitting there longest it’ll knock the whole lot over, just like those giant pyramids of baked beans you don’t see in supermarkets and probably never existed except in cartoons and adverts, and maybe Supermarket Sweep with Dale Winton.

Or I could take a leaf out of Mrs Pickford’s book and do a spot of gardening. I hate gardening. 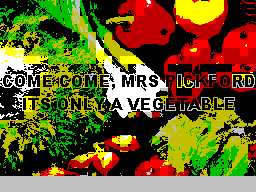 Mrs Pickford goes down the market.

I decided to see what Mrs Pickford was up to. She’s been out in the garden all day but I think I spotted the nasty garden shite fairy, so I should probably w…. hold on, is that a CUSTOM FONT????!

Yes, unclechicken (not Uncle Chicken, never that) is showing a dangerous amount of technical competence with his entry “Come Come, Mrs Pickford, Its (sic) Only A Vegetable”. The loading screen itself is a well-rendered colourful menagerie of vegetables, with the bottom screen area curiously left out.

Thankfully the plot is minimal, at best, and the controls are ridiculous. 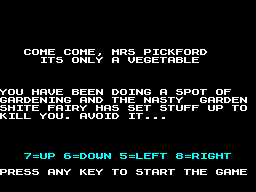 You play Mrs Pickford and need to avoid the stuff the NGS Fairy has sent to kill you. I assume this is the fairy equivalent of a gladiatorial contest, Mrs Pickford merely being used for entertainment rather than a personal vendetta. But maybe there is some deep-seated rivalry, and in the sequel unclechicken will flesh out the NGS Fairy’s backstory and we discover that she used to be Mrs Pickford’s guardian angel until Mrs Pickford did something unimaginable.

So, there’s a steaming pile of dog shite (and that’s just the game), a lawnmower (or is it a pram?), a smiley face(??) and something that could be an unexploded WW2 bomb, a carrot or a molotov cocktail. Either way, I’d suggest to avoid it. You don’t mess with carrots. 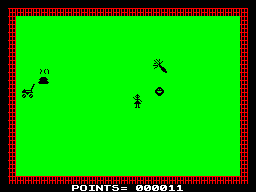 I’m going to put a sheet over this screenshot, and you have to name the objects… actually, let’s not bother with the sheet.

Everything moves very very quickly. So quickly, in fact, that I wasn’t sure this was written in BASIC. It isn’t. Beyond the instruction screen, it’s just over 7K of pure machine code. As I said, unclechicken is displaying an extraordinary amount of technical competence. However, he has harnessed the machine code for the power of good, and managed to make the game even more unplayable than it would have been in BASIC. If you can survive for more than five seconds you’re doing well.

When you die you’re sent straight back to the title screen and invariably back into the action because you’re still holding down 8 or 6 or whatever key moves you AWAY from the freaky grinning bodyless face, so you have no idea what score you attained but you are sure you can last for six-and-a-half seconds this time, then the lawnmower runs you over and you’re still not sure whether that’s a vegetable or something the Germans sent over during the war, or maybe it’s that vase of flowers Mr Pickford bought you on Thursday, and it’s getting dark and you’re not sure how long you’ve been running but you think you might have missed Poldark, or did that finish last week, and if you ever see that fairy again she’s going to get acquainted with the underside of your boot.