it's crap! In a funky skillo sort of a way.
leespoons
Challenges, Crap Games
5 Comments

Picture the scene. The date: early January, 2016. The location: Sqij Towers. It’s a lonely place now. Everyone’s packed up and gone home. BloodBaz has gone back to his day job as taster of finest ales, Myke-P has joined a Beastie Boys tribute act, and as for DeKay, I’ve made sure to notify the police that he’s on the loose again. And if I peer at the horizon I can just make out the smoke from Chris Young’s beloved 1985 Vauxhall Skova (a cross between a Skoda and a Nova, with none of the redeeming features of both) as he makes the tortuous 17-hour journey over the wooden hills to Bedfordshire. Time to make myself a cup of strong coffee and review the last couple of games, then… hang on a minute, what’s happened to the Sqij Towers finest cutlery? Chris! CHRIS! Get back here, y’bast!

So (having followed Chris’s Czechoslovenian deathmobile at a light amble and retrieved my spoons) there’s just little old me and the last couple of games now. I can see why the ex-Sqij Towers residents have left this one, although to be fair to Myke, I couldn’t ask him to review his own game. It’s a bloody ZX81 effort again, which means I have to dust off the EightyOne emulator. Again. Oh joy! I’m almost nostalgic for the days of Sunteam and his +3 disks! Almost.

While I’m looking for it, I’ll take the advice Myke gave me a couple of days ago – “guess what the game will be and then play it to see if you were right”. Well, as “The” is a ZX81 game, I’m guessing it’ll be an explosion of colour and cacophony of multichannel sound, and not a piece of monochrome, sluggish crap featuring a blocky representation of the Easter Bunny that looks more like a cockroach.

I’ve found EightyOne now, it was in a folder marked “Kitchen Drawer” along with PetrolReceiptFrom2011.jpg, OldMobilePhoneCharger.exe, and 17DeadAABatteries.rar. Should’ve looked there in the first place. 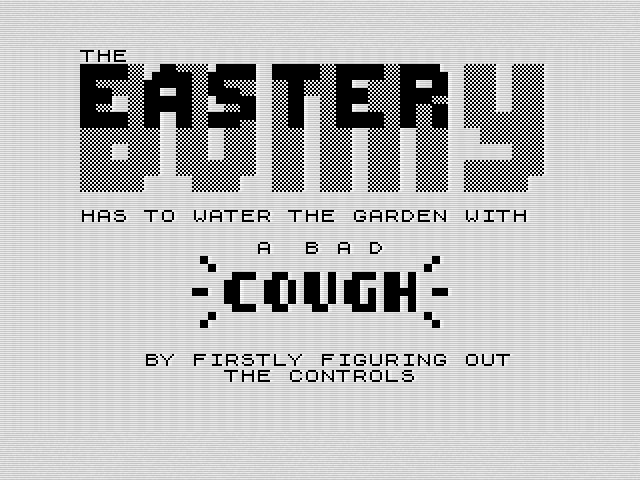 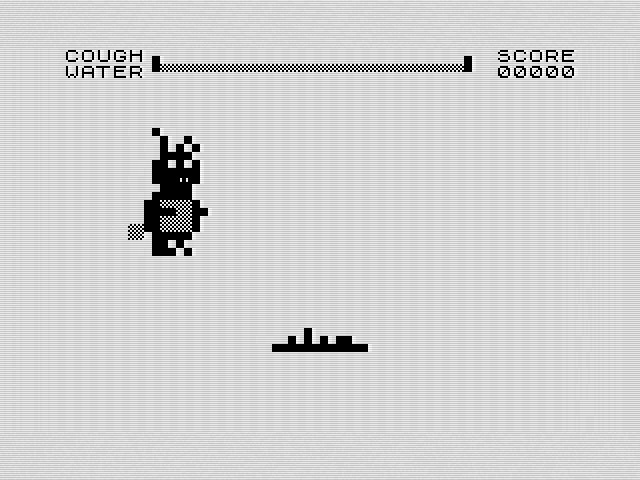 I certainly wouldn’t want to meet this particular character on a dark night, anyway. Myke hasn’t included any instructions, but if you have a logical brain, you’ll work out the controls and the aim of the game soon enough. Unfortunately I don’t have a logical brain (why else would I have agreed to host this competition?), so I spend seventeen minutes jabbing at keys, some of which I think might be doing something, but it’s hard to tell because the rabbit/beetle/mutant termite thingy disappears every time.

This is Myke’s first ZX81 game. It’d be churlish of me to follow that statement with “…and it shows!”, and I suppose we’ve all got to start somewhere, but stick to Speccy games next time, eh?