Remember Kamikaze Karaoke Shootout? I’ve spent the last month trying to forget about it, but Myke-P just won’t let me, with this additional pack (sorry, Trak Pak) of Christmas (s)hits. You know that sinking feeling you get when you’re at work, and it’s five to five on a Friday evening, and you’re just about to go down the pub, and then your boss walks past your desk and goes “Oh, if I could just have that sales report on my desk by seventeen hundred hours today, there’s a good chap”? That’s what it felt like when I read the “Oh, and by the way” at the very bottom of Myke’s email about his last game, “The“.

It’s a cover tape bonus, so I won’t waste too much time on it, as I’ve still got one last proper game (remember those? Proper ZX Spectrum games? No, me neither) to review. In the tradition of bonus giveaways like Moley Christmas, Myke was commissioned to make this by Your World of Comp.Sys.Sinclair Spectrum User magazine, a publication I’m not familiar with, but I’m sure is even funkier, twice as skillo and infinitely more crapola than the competition (Your Sinkplunger, Computer & Vegetable Games and so on) 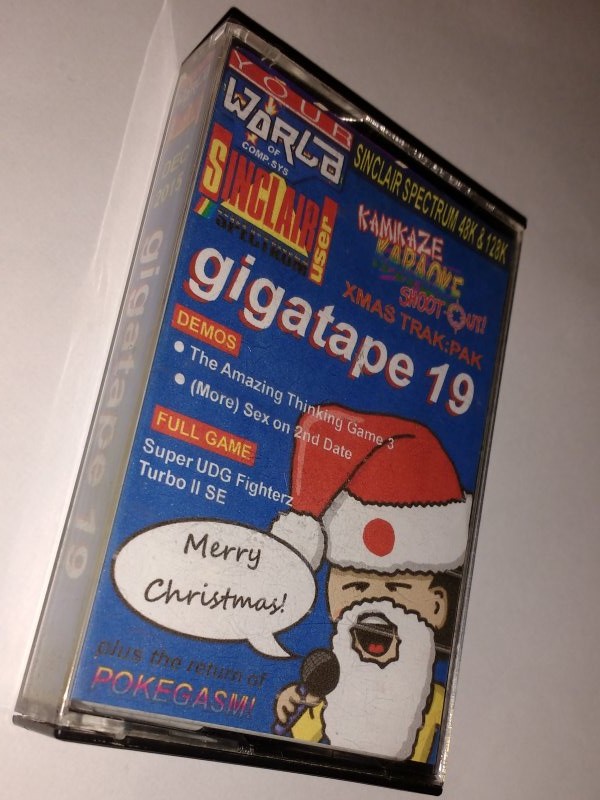 Merry Christmas! Today is January 14th. I feel about as Christmassy as Wham did in their video for Club Tropicana. I ran out of pickled walnuts on Boxing Day, I have no interest in my colleagues’ leftover Christmas cake, and if anyone so much as whistles half a bar of that godawful Paul McCartney song within earshot, I’m liable to punch them in the baubles. Mind you, that applies at any time of year.

Right. As this is a Trak Pak and not a proper game (and I’ve already wasted 250-odd words on it) you’ll need your original copy of Karaoke Kamikaze Shootout. This can be found here. Then load it in, stick the Christmas tzx thingy in the festive virtual wossname, read the on-screen instructions (which to Myke’s credit are very easy to follow – he’s certainly aware of the mental capacity of his target audience) and marvel at the awful beepy rendition of whichever Chrimble tune Myke chose to, erm, rend. Rendite. Renditionize?

Is that 400 words yet? Oh, that’ll do. It’s not as if it hasn’t already been reviewed once. Either play the thing now and feel all nostalgic for three weeks ago when it was actually Christmas, or shove it in the attic until the middle of November and then go “What’s this crap?” and throw it away.

In a fit of efficiency, I’ve started writing this review ON THE DAY Sqij’s own Myke-P sent it in. He has already completed the forfeit of reviewing some other piece of crap before I even had chance to “suggest” he “might want to help Lee out a bit”, and since I’d bothered to actually have a go on the damn thing it seemed only fair to make some sort of attempt to review it. 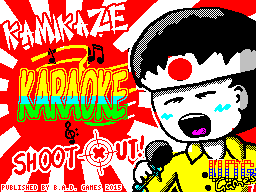 But who will win Kamikaze Shoot-out? PLACE BETS NOW!

Like the greatest games and movie releases, Kamikaze Karaoke Shootout was announced way before it was any more than a title, and Myke has been beavering away on it for at least a year and a half, which is way more than the average CSSCGC entry. Although, having said that, when I was the host in 2007, I was sent rather a lot of games that had been written back in the 1980s, some of which hadn’t even been finished after twenty years or so (Rickard Berglind’s Haunted House, I’m looking at you) 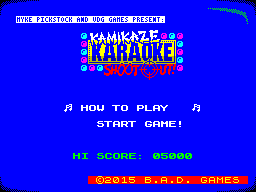 Anyway, KKS only existed because of a Videogame Name Generator which I hadn’t noticed, or perhaps had forgotten, existed. I gave it a whirl, and my next CGC entry will be called “Enormous Kabuki Underground” (That sounds like a shit nightclub. Ed), or “Monty Python’s Unicorn Beta” (I think that was on Radio 4. Ed) or maybe “Create Your Own Assault Raider” (That’s a Partworks series out January. Ed), or even “Post-Apocalyptic Racing in the Middle East” (They show that late night on Channel 5. Ed), or perhaps “Fantastic Blade Collection” (That’s also a Partworks series, are you sure this isn’t a Partworks idea generator? Ed). A-Ha! “Deranged Plumber Experience”, now that’s finally a game I can get behind! (Facebook. Ed) “Boring Stick Knights”? (You wrote that way back in 2001. Ed) “Sexy Monster Tournament”? (Give up. Ed)* 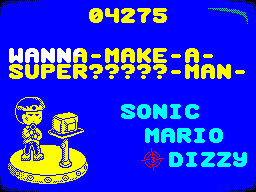 Thankfully, Kamikaze Karaoke Shootout is what Myke settled on, and it’s… woefully competent (you can use that quote on the box), sort of SingStar meets HIGNFY’s missing words round.

I’ve never played SingStar, but I have played Guitar Hero, which has a singing option (which I’ve never tried as I don’t own a USB mic). KKS has a bit of a Guitar Hero vibe to it, so I imagine the lead singer bit of Guitar Hero is pretty much the same as in KKS, just at Glastonbury instead of a dive in Croydon.

I’ve also “performed” actual karaoke, and this is a fairly accurate simulation of that experience, albeit one that is hosted by a sadist who has removed random words from the song lyrics. 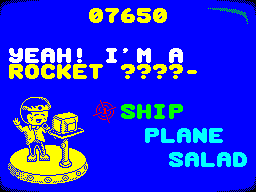 Quite simply, you sing along to the song using the lyrics provided (this step is entirely optional). Myke has helpfully not provided the complete tracks usually present on Side B of the cassette tape, so you’ll need to find your own copies (or not bother; playing the backing track is entirely optional). It’s a shame the game doesn’t play a crap beeper or AY rendition of the song in question, but I suspect memory is a bit tight – it’s a multi-load as it is. There are four songs to choose from in the “base game” (more on that later), only two of which I immediately recognised. 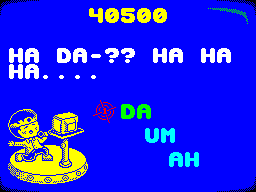 Every two screens’ worth of lyrics there is a word missing. On screen is a multiple choice option as to what it could be. If you “sing” the correct word the little Kamikaze singer gets increasingly more animated, and you get a whole bunch of points to boot. Repeatedly getting the lyrics right, and getting them early, nets you more points, Guitar Hero-style. Sing the wrong word and the crowd boos you off stage (probably) and you have to work your way up to the big multipliers again. The multipliers aren’t shown on screen (although the enthusiasm emanating from the little guy might offer some clue as to what it is), which is a bit of an oversight, but otherwise the presentation is lovely and functional, and looks the part of a karaoke machine.

At the end of the game, again Guitar Hero style (I’m sure the letters from Activision’s lawyers are in the post), you get to see your lyric streak and how well you did. 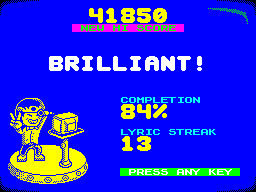 In a move befitting of an EA wannabe, the game also offers what the kids are calling “DLC”. This is overpriced extra content which should have come with the game but, for extortion reasons, didn’t. One hooky copy of a so-called “Trak:Pak” is included. I’m not sure why it’s a hooky copy since Myke wrote it and he’s the one who sent us our review copy, but it turns out this pack contains “Ballads”. What will it be? I love a power ballad. Maybe there’s a bit of Cher or something in it? With some trepidation I loaded it up. 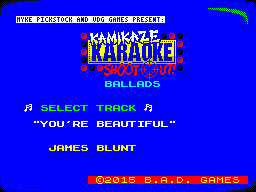 James Blunt! (We all remember that weapon in Frogger)

I quickly reset the Spectrum having realised why Myke wasn’t taking full responsibility for this Trak:Pak TZX. I can’t help thinking a Christmas Trak:Pak would have been a better cash-in for this time of year.

All Myke needs to do is port this to PS4 and add a speech recognition routine (instead of the multiple-choice-’em-up), and he’s got next Christmas’ hit game. I can almost hear Activision wishing they’d thought of it first.

* Incidentally, European Sandwich Hunter is coming to a WHSmith near you soon… probably… except I got the name wrong.