Once again I find myself whistling Bigmouth Strikes Again under my breath, as a throwaway comment I made a fortnight ago – about loading noises sounding like seagulls being tortured – comes back to haunt me today. This time it’s an Advanced Simulator (yay!) from previous CGC host Guesser, with sprites drawn by p13z. I can just picture the pair of them now, giggling away at the back of the #speccy IRC channel like a couple of schoolboys, going “Let’s wind up the host of the Crap Games competition!”

OK, let’s see how many annoyance boxes it ticks. +3 disk? Check! Like sunteam’s games, this will only run on one of those new-fangled Amstrad things with the diskette drivette thingette on the right-hand side, despite the code being a mere 8 or 9K. If this had come out back in the day I would’ve had to be content with just drooling over the reviews in Your Sinclair while sitting there waiting an absolute dog’s age for Out Run to multiload into my battered old 48k machine. Of course, under emulation anyone can “own” a +3, but that’s not the point, is it? There’s no fun at all in opening a file for it to load straight away – no loading screen, no anticipation, no Schrödinger’s Loader (will it work, or won’t it?) and no loading noises!

Anti-piracy mechanism? Check! Despite Guesser’s admission that the game doesn’t need a +3 to run, when I converted the game to tap and reloaded in a “normal” Speccy, I got this message: 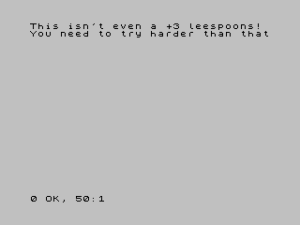 Ha. Hahaha. Very droll. Now I suppose I could go through the code and work out how to disable this message, but I think I’ll leave that as an exercise for the reader (if there are any left, that is).

To the game. Guesser wrote a comprehensive blurb when sending in this entry, which I’ll reproduce here to save myself some valuable review time:

Picture the scene, you’re standing on the promenade at Whitby, about to tuck into your chips. However, as you open the awful polystyrene box with a squeak, a squadron of herring gulls surround you with their beady eyes locked on the greasy fried potato morsels.
It’s every gull for himself and in the ensuing carnage you are lucky to escape alive. Hungry, and with clothes in tatters you sneak away vowing to have your revenge.

In this exciting game, you turn the tables on those pesky critters. Armed with a pointy stick you return to the scene of the crime and merrily take your revenge.

When you have had enough of prodding marine fowl, don’t forget to press the Q key to exit and see your score!

Couldn’t have put it better myself. So the game begins, and oh my word look at those graphics! I haven’t seen such artwork on a Spectrum since the days of Trap Door and Flunky – if I didn’t know better I’d wonder whether p13z is actually a pseudonym for Don Priestley. 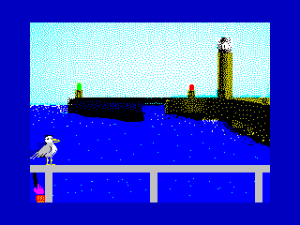 Being a soft southern shandy-drinker I’ve never been to Whitby, but now I won’t ever need to – this game is so realistic that I can almost smell the fish and chips wafting across the bay from the direction of that giant yellow trouser-snake on the right-hand side. (That’s supposed to be a lighthouse! Ed.) Guesser is rightly proud of his sprite engine, as it features “buffered drawing”, “screen flipping”, and a technique he calles “repurposing the flash bit in the sprite data as a transparent paper colour flag”. No, me neither.

So with the curious key combination of E, R and T, you set about bothering those nasty squawking buggers who keep eyeing up your lunch. It must be cold in Whitby, judging by the long-sleeved knitted jumper worn by the protagonist. But look what happens when you give old Cedric the seagull a vengeful prod with the pointy stick: 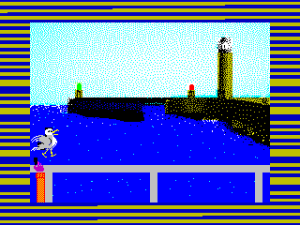 That’s right, he flies up in the air and emits a short SQWAAAAWWWK, via the medium of the Speccy’s loading routine, which contrary to what I previously thought, sounds absolutely nothing like a seagull at all! (or indeed any type of gull, for as we all know, there is no such thing as “a seagull”, this being a layperson’s term and not one used by wildlife experts like Kate Humble. Although on the other hand, there are such things as “tits”. Mmmmm, Kate Humb{There’s only one tit round here, and it doesn’t belong to Kate Humble. Ed.} )

After the novelty has worn off, which takes about three seconds, I realised just how bad ASSTS is. The scoring system is rubbish – you don’t even know what you’ve scored until you quit the game. It only works on a machine which most people don’t have, and other than sending me completely over the edge it has no purpose or point whatsoever (unless you count the point of the pointy stick).

But on the plus side it’s a crap idea well executed, which certainly makes a change from a crap idea executed crappily, and it gives those poor deprived +3 owners a chance to endure the loading noises suffered for years by us lesser mortals. Plus it did make me laugh, so I award this piece of gull guano from Guesser a whopping +3 percent!