it's crap! In a funky skillo sort of a way.
leespoons
Crap Games
5 Comments

Never let it be said we don’t have our collective finger on the pulse here at Sqij Towers. Only seven weeks since the Punchygate incident and two-and-a-half weeks since Andrew Green sent in this highly topical game, and here’s the review!

Unlike Dave R-Tape and his “Geff Capes”, Andrew doesn’t pussyfoot around – this really is Jeremy Clarkson. Look! 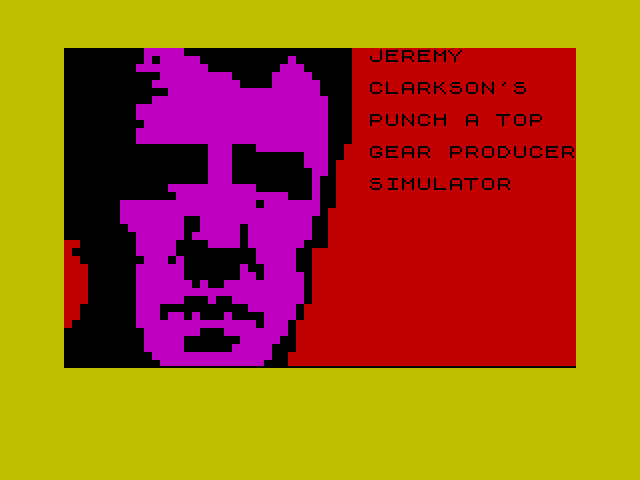 The effect is better if you stand on the other side of the room and take your glasses off, but that’s definitely the best Chunk-O-Vision rendition of Jeremy Clarkson I’ve seen all day! And as if that wasn’t enough, there’s a short beepy rendition of the Top Gear theme (a.k.a. Jessica by the Allman Brothers) which contains more bum notes than, erm, a load of five pound notes with butt-cheeks drawn on them. (Nice anal-ogy! Ed.)

If only the game was as enjoyable. You are Jeremy Clarkson, and you’re hungry and angry – hangry in fact – because some selfish producer hasn’t managed to rustle up the half a cow’s arse in between two bread vans you ordered for lunch. There’s only one way to settle this – act like a spoilt three-year-old and punch them in the face. The producer is sensibly cowering over the other side of the screen, but luckily you’re armed with one of those boxing gloves on an extendable arm you’ve only ever seen in cartoons. All you need to do is whack him in the head and you’ve won – perhaps if you hit him hard enough you can have produceur a l’orange for dinner. 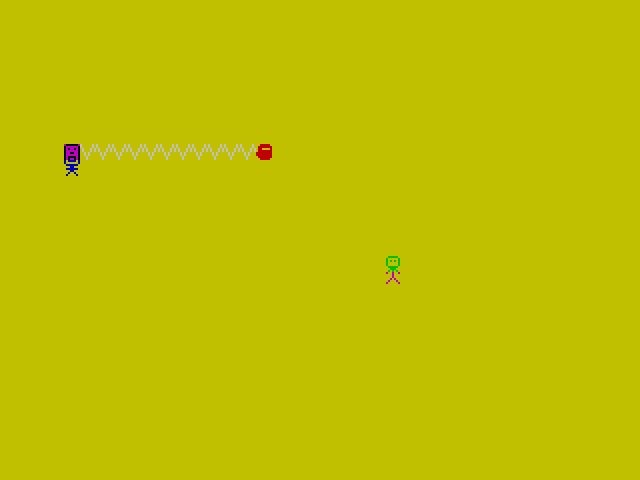 This started out as an enjoyable BASIC game – I particularly liked the oversized Clarkson head graphic – but it’s actually quite tricky, as the producer has the astounding ability to teleport up and down at will. Punching him in the legs has no effect either, and when I first played the game I couldn’t land a single blow to the head, making me wonder if it was possible to complete it at all. However I kept going for a full minute, and finally felt the immense satisfaction of socking some poor sod in the face for no good reason apart from the size of my ego/bank balance/willy (delete as appropriate).

I could get used to this! *clicks fingers* Oi, Chris*! Fetch me my dinner NOW!

*either of the Sqij Towers Chrises will do. Or Myke. Not sure about deKay though, the last time he made me a cup of tea the milk tasted a bit off…