it's crap! In a funky skillo sort of a way.
leespoons
Challenges, Crap Games
6 Comments

The inimitable MatGubbins returns with yet another Keyword Challenge entry in glorious Chunk-O-Vision®™©(patent pending). As with most of Mat’s games it’s yet another case of style over content, with some of the best graphics I’ve seen so far in the competition – sadly utterly wasted on the thin excuse for a game! 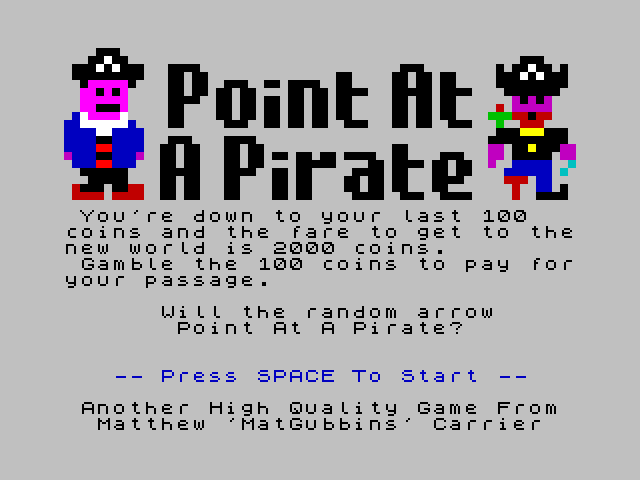 It’s a gambling game. Now, I’ve been addicted to many things over the years – beer, cigarettes, spicy Nik Naks, sex (You should be so lucky! Ed.) but one thing I’ve never understood is gambling. My dad did the football pools for years back in the Eighties – my Saturday afternoons were dominated by “Queen of the South nil, Stenhousemuir nil” – yet he didn’t win so much as a brass farthing. I was in a lottery syndicate for a year back in the Nineties, and we never won so much as a thruppenny bit. And every year at work we do a sweepstake on the Grand Horse Racing Race (or whatever it’s called), and every year the boss wins, much to everyone else’s annoyance. However, the beauty of a Speccy game about gambling is you don’t have to spend your hard-earned cash at all!

I’ll keep this review fairly quick, as I know there haven’t been any updates for ages (for my part, a combination of school holidays and crap internet at home was to blame). You have 100 coins and have to gamble it up to 2000 so you can pay your fare to the New World by seeing if your random arrow lands on a pirate. Sounds easy, right? Wrong… if your arrow lands on a pirate, you win some more coins, but if it lands on a non-pirate, you lose. A bit like my dad with the bloody football pools. 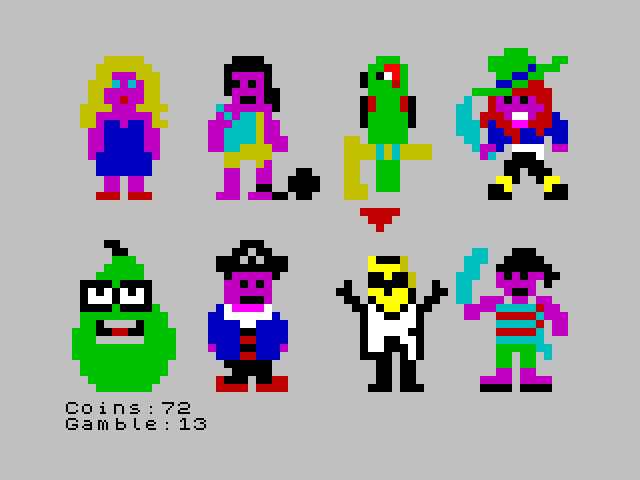 I have to say, Mat’s really excelled himself here with the Chunk-O-Vision graphics and characters. I’m not quite sure how he did it or how long it took, but it looks brilliant! However the game is just a bog standard BASIC guessing game, and once again suffers from the RANDOMIZE curse – I’ll give you a tip, don’t gamble too much for the first 10 or so goes, as you won’t land on a pirate. However Mat more than makes up for this with a pixellated version of Emilia Fox without any clothes – hubba hubba! 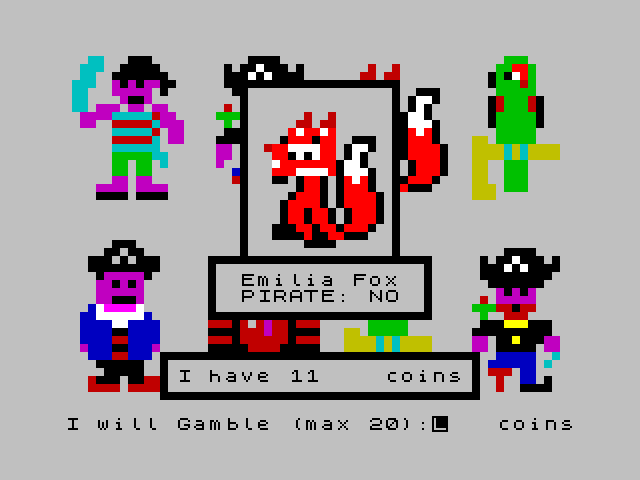 As the game itself is so crap, Mat’s kindly included a demo mode showing all the characters, which can be accessed by GOTO 6800. And if you do eventually win the game, there’s a nicely-rendered screen at the end (no spoilers, but unfortunately it’s not a properly-pixellated Emilia Fox) If not for the characters I would’ve lost interest after about three seconds, but I’ll give this 99 dubloons out of 100, provided Mat goes away and makes a proper game out of those graphics!