it's crap! In a funky skillo sort of a way.
Myke-P
Challenges, Crap Games
12 Comments

Note: This review, like the game, is recycled from last year’s Touch the Ring by R Tape, which in turn was recycled from 2013’s Kick the Ballboy by Rebelstar without a Cause.

To be honest I can’t believe I’m getting away with this twice!

Well, you can’t accuse the Spectrum community of not having its finger on the pulse – barely a day has passed since the last big Boozed-up Britain story and a satirical game has appeared. You don’t have to know much about bar work to enjoy this game, if you can recognise Al Murray doing his famous “White wine for the ladies” routine you will know this game refers to the ongoing challenge of owning a bar and having to deal with inebriated and obnoxious customers. 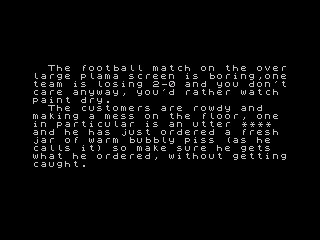 The opening screen creates a dramatic atmosphere, and tells you what you need to do: PISS IN A PINT! The game boasts some animated sprites of Massivepubian proportions, and as the customer’s eyes scan the pub left and right, you need to press P to piss while he’s looking the other way. The customer is a creature of habit, and his eyes follow a somewhat hypnotic (and very predictable!) rhythm. 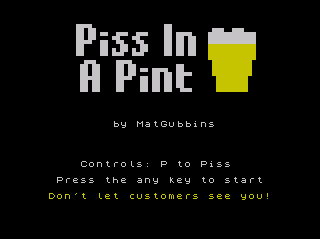 My best score is 102, and it’s harder than you might imagine as you become impatient and attempt to squeeze another one in before the customer sees. In this way PIAP is a very clever, if open ended game. However, it is silent and cries out for some grating BEEP effects.

I may not have said many negative things about this game yet, but rest assured, it is most definitely CRAP! An excellent third Keyword Challenge entry from MatGubbins.

Tipshack: When the customer’s eyes have just moved away from the right, you can squeeze out 6 or 7 good drips.