it's crap! In a funky skillo sort of a way.
Myke-P
Crap Games
7 Comments

I gained a bit of a reputation last year for unintentionally disarming potentially earth-shattering satire, by failing to review entries while the subject of said mockery was still topical.

So, when I saw that sunteam had put in the (Minimal – Ed) effort for a topical gag about the currently unavailable World of Spectrum forums, I figured it was my responsibility to get the review up before Fogarty and the boys get the blasted thing fixed!

My first challenge, however, was to figure out how to load a .dsk file in Fuse.

To begin I open the .dsk file from the File Menu. The Spectrum resets and displays an unfamiliar copyright message… Who is this Amstrad!?

I select +3 BASIC from the menu and press enter, then type load “forum.wos” (only because leespoons told me that’s what I had to do!)

I press enter once more but, aside from an ‘OK’ message at the bottom of the screen, nothing happens…

… Minutes pass before I give in to curiosity and press a key – the program listing appears and nearly takes up a whole screen! (Gasp – Ed!)

Aha so it has worked. With the smell of victory filling my nostrils, I type run, press enter and wait…

A solitary (and, if I might say, quite rude) BEEP alerts me to the fact the program has started and that I must now “Press any key to recreate the complete WOS forum feel.”

A small group of onlookers has now gathered around my workstation and, as I move my finger towards the keyboard, you could hear a pin drop… 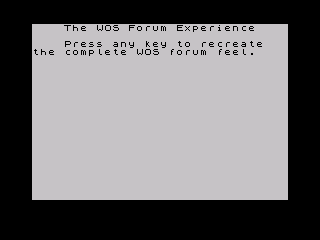 sunteam finally justifies their choice of +3 .dsk format by taking mere seconds to deliver the punchline – albeit to a generally disappointed crowd.

(If this had been a standard Spectrum 48K .tap file we’d have be waiting close to half a minute for this*!) 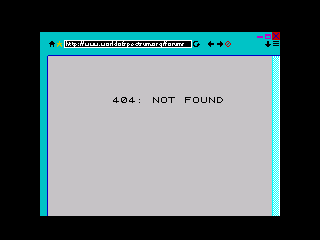 Unfortunately the issue with WoS doesn’t look to be your common-or-garden client-side 404 error, but rather a server-side 503 or “Bejeezuz – what the hell happened to my f*#@in’ server!?” error, so better luck next time sunteam!

Score: A clip ’round the ear you cheeky scamp – and think yoursel’ lucky!