it's crap! In a funky skillo sort of a way.
deKay
Famous Crap Games Throughout History
4 Comments

As the end of the 8-bit era drew near, very few companies remained committed to developing games for the Spectrum and Commodore 64. Sometimes an easy port of a 16-bit or arcade title would appear, along with a few games rehashed as sequels and several versions of Fun School, but as potential buyers dwindled so did the number of releases.

One way of maximising sales in a small market was to buy cheap licences for known media, such as Charlie Chalk and Rentaghost. Well known enough to pique interest, but not well known or popular enough (at the time, at least) to demand large licensing fees. One such bargain basement buy were the rights to Alan Whicker, snapped up by IJK Software.

IJK brought in long-time associate Harry S. Price to create the game for them. Well known for being able to quickly create original ideas, cheaply, Price was ideal. You could say The Price was Right.

No, I suppose you couldn’t.

Price set to work turning the name into a playable game. As he’d done before, he borrowed a game engine from another title to save some time, and redrew some of the graphics. Within a week he’d created a totally original game, where you as Benhouse Barry have to visit locations around the world, collecting wicker furniture while avoiding Alan and his Angry Red Ostriches. IJK Software were pleased with Harry’s work, and paid him £150, equal to the Alan Whicker rights. 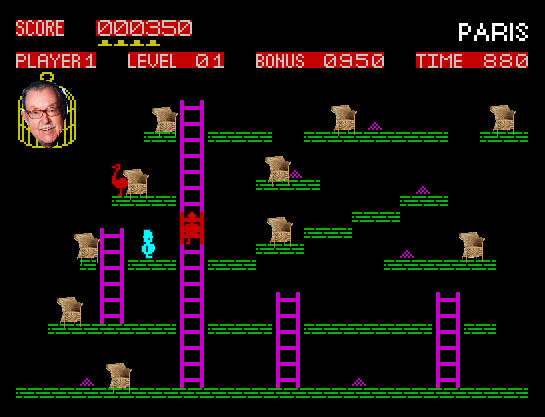 Your Sinclair, the only Spectrum magazine left at the time, reviewed it but it scored poorly. Their main complaint was that it reminded them too much of an earlier Spectrum game, although they couldn’t quite remember which. They also mentioned that each level, although named after a famous city, bore no resemblance to it, unlike, for example, Pang, or Short’s Fuse. Finally, they slated the way Alan’s comical head bounced around after Benhouse Barry in a completely unrealistic manner. “A total waste of a good licence”, they concluded.

By the time the sequel, Alan Whicker’s World of Wicker 2 (fully using all the available screen space), was announced, the 8-bit game market had completely collapsed and even Your Sinclair had folded – and not just down the middle where the staples were. Promises of a more open world game, with flick-screen platforming and set in the “IJK Wicker Furniture Factory” fell on deaf eyes and the title was cancelled shortly after Harry S. Price was arrested (and subsequently executed) in an unrelated plagorism case. Rumours of a 2013 Xbox One launch title reboot by Rare turned out to be unfounded.