it's crap! In a funky skillo sort of a way.
leespoons
Crap Games
7 Comments

Golf. Social media webinars. Twenty-minute conversations with one’s significant other about washing. To me, all of these things are as boring as watching paint dry. The thing is though, how do you tell when paint’s dry if you’re just watching it, rather than, say, dabbing it at regular intervals with your finger and going “oh bollocks, still wet”?

Well there’s two ways to find out – you could paint something and watch it dry, or you could play this fantastic simulator by David Pagett which recreates all the thrills and excitement you’d expect to find from a game called “Watching Paint Dry”. David helpfully listed some of the game’s features when sending in the game, and it all sounds rather fun!

That’s the sort of marketing blurb that would have sold hundreds of thousands of games in 1982. I can almost hear the last remaining 16k Speccy owner going “Hooray, finally someone’s released a game I can play! I’ve been patiently waiting over 30 years, my copy of Sir Lancelot is nearly worn out!”

So the game (written in good old BASIC) loads and then stops, in the style of the Cassette 50 games – a good start! On running you’re presented with red text on a yellow screen (that’ll be the Full Colour, then) and some instructions of sorts (press 1 to start, press 2 to stop), along with the high score (that’ll be the High Scores, then). However it’s not altogether clear if you need to hold down 1, repeatedly press 1 or just tap it once. I tapped it once and a patch of bright green paint appeared, along with a beeping noise (that’ll be the Sound, then). 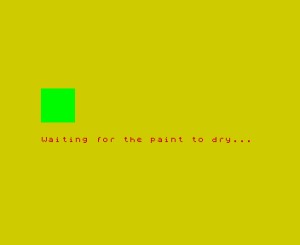 However the beeping abruptly stopped and the bright green paint turned to dark green. I’d got a score of 1. Hmmmm, perhaps I need to hold it down a bit longer then. Try again. I hold down 1 for a bit, but soon get bored. I get 9. Perhaps I need to tap it a few times. Tap tap tap tap tap tap tap tap. Ooh, it’s still going. That’ll be the trick then. 44! Not bad, but not as good as David and his family who got a high score of 95 “before their eyes fell out!” 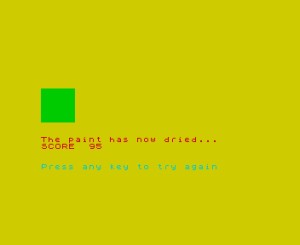 95? Exactly the same as David’s high score? Now that is a coincidence! There’s two explanations here – either I’m really great at this game (getting the same score as the game’s creator is pretty good, I’d say), or every time you load and run it, it comes up with the exact same pattern of numbers, because it uses the RND function without first RANDOMIZE-ing. However I’ll give the author the benefit of the doubt here and say it’s down to my amazing paint-watching skills. David did say it kept his kids amused for about 15 minutes trying to beat each other’s score – so next time you hear “Daaaa-aaaa-aaad! I’m boooo-oooo-oooored!” on a Sunday afternoon, you know what to do!

And if the BEEPs are starting to annoy you while you play, just drown them out with this: