Here’s the first of several entries from sunteam, who despite the “team” part of the name is one bloke called Paul (or perhaps a seven-year-old boy called Paul, judging by the rather silly title of this game). This is also the first game optimised for the +3, a machine I could only dream of back in 1988 when my ageing 48k Spectrum + was on its last membrane.

In sunteam’s own words – “I’m sure you’ll agree it’s a stunning achievement, from the amazing soundtrack down to the quality high resolution graphics. I’ve had to attach it as a disk file as it makes full use of the +3 hardware, even though it’s the first Spectrum game I’ve made for 25 years.”

In practice, this means I have to not only change the settings on my emulator, but actually go into +3 BASIC and type LOAD “MUMMY.BRA” (rather than typing LOAD “” or pressing Enter) to get the thing to work. Immediate bonus crap points for inconveniencing me! Let’s hope it’s worth it!

Oh. It’s stopped with an OK message. I don’t think I ever even saw a +3 back in the day so this is all alien territory to me. Well I’m looking forward to the amazing soundtrack and hi-res graphics… so I type RUN (yet more inconvenience, if this was in 48k mode I could just tap R) and the first thing that hits me is the fantastic theme tune, which cleverly has the same number of syllables in it as the title, meaning you can sing along to it (rather like The Sweeney in the 1970s). “Mummm-EEEE, where’s my BRAAAAAA!”. I’m sure this sort of audio wizardry wouldn’t be possible on a 48k or even a bog standard 128k Spectrum, oh no. 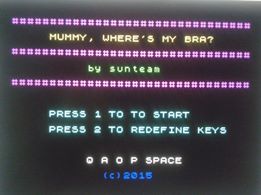 There’s also a redefine keys option with a similar tune (“Reeeeeeee-deeeeeeeee-fiiiiiine KEEEEEEEEEEEEEEYS!”) although sadly this freemium option is not available until 2018. I look forward to it!

Oh, hang on a minute. I’m supposed to be reviewing the game, not the the contents of my head! Before the nurses wheel me back into my padded cell for the night, I think it’s time we went over to a guest review from none other than prolific crap game author, Chris Young. But first, another screenshot: 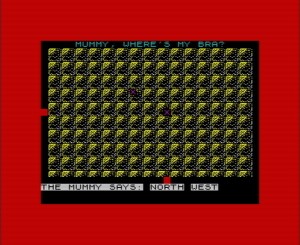 Chris says:
The promise of a game making full use of the +3’s hardware? A title which made me think I’d be playing a teenage girl rummaging around in a laundry basket? I’m the first to admit I was a little curious and couldn’t resist taking a look at this.

It didn’t live up to expectations. Apparently my friend “Bra” (not sure what that’s short for, possibly “Brad”) is kidnapped and hidden inside an egyptian tomb. The mummy gives hints as to where “Bra” is, but with only four attempts there’s no chance of succeeding and little fun in guessing. Utter pants.

Thank you Chris. As to the score, I give it 32A percent – because it falls a bit flat.