Ah, celebrity sports tie-ins. They were everywhere in the 1980s, weren’t they? From the sublime (Daley Thompson’s Decathlon) to the ridiculous (Eddie Edwards’ Super Ski), the tie-in was a cunning ploy by software publishers to make their dodgy game that little bit more marketable. This trend hasn’t been lost on Dave Hughes, curator of the CSSCGC2013 and author of more crap games than Harry S. Price has ripped off (as well as several good ones, including one featuring a 3-channel beeper tune by yours truly, plug plug)

Anyway, I digress. On first glance, this game appears to be yet another sports tie-in featuring Strongest Man In The World and Popeye’s arch-nemesis Bluto/Brutus lookalike, Geoff Capes, who, having retired from chopping buses in half with his little finger, now spends his time breeding budgerigars in a small village just outside Grantham. Yes, really. Of course, there’s already a tie-in game about strong man Geoff Capes – Geoff Capes Strong Man. But hold on, look at the (admittedly quite impressive) loading screen: 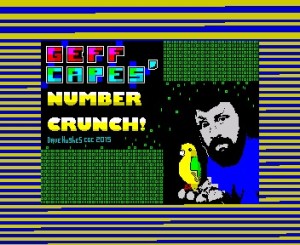 Hang on a minute. Geff Capes? Either Dave has made a bit of a typo, or it turns out this isn’t a game about our Geoff at all, but about a completely different bloke with a very similar name who happens to have a very similar beard and a very similar predilection for budgies. That must be really annoying when he goes down the pub. “Here, aren’t you Geoff Capes?” “No, I’m GEFF Capes.”

Anyway. It seems our “Geff” has different strengths to his near-namesake – he’s a bit of a wiz with numbers. Following an impressive animated sequence (if you’re impressed by blocky pictures of bearded blokes with frightening red eyes) and some pointless yet somehow comforting random bleeping, we come to the point of the game, which is – and this is such an obvious idea I can’t believe it hasn’t been done before – hexadecimal and budgerigars! YES!

So a graphical representation of a binary number is displayed, alongside a graphical representation of Geff, and you have to convert this number to hex to win a budgy (because in Geff’s world, a budgie is called a “budgy”. Obviously.) Take too long to work it out, and you lose a budgy. Get the number wrong, and Geff takes away eight of your feathered friends, like the budgy-hoarding git he is.

I started off quite well – remembering the pattern 8, 4, 2, 1 helped – and managed to win myself a handful of rather deformed budgies, but soon came unstuck when I couldn’t work out what 14 was in hex (a clue – it’s not B)

What you do with these budgies once you’ve collected them is anyone’s guess. Delving into the BASIC I couldn’t see an end to the game, but perhaps if you get to 24 without losing the will to live there’s a sequence where they can be baked in a pie and set before the king. (That’s blackbirds! Ed.)

Despite the lack of ending I quite enjoyed this entry – not least because it finally gives Geff Capes his 15 minutes of fame. Now he can hold his head up high in the pub and say “I’m GEFF Capes, and I’ve got my own computer game!”