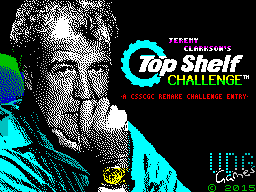 For those of you living under a rock for the past fifteen years, the original TSC had you playing as a spotty teenager in your local branch of John Menzies, trying to get a shufty of the jazz mags without the built-like-a-brick-shithouse of a newsagent catching you and throwing you out of the shop by your ear. Should you succeed you were rewarded with some gratuitous 8-bit nudity which we can only assume Derek didn’t enjoy searching for on Altavista. 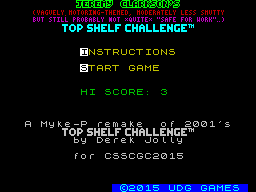 Needless to say, Myke has upped the stakes with this remake and tried to make it into the game it should have been. Rather than the original text-adventure style, we now have the entire shop layout graphically presented, with the shopkeeper reading the Racing Post between checking for shoplifters and spotty oiks. Other customers come and go through inter-dimensional time portals. The layout of magazines on the shelves are randomly generated, although alas it’s not possible to walk around – I assume you’ve already figured out where the magazines of interest are and if you wander off you’re likely to only end up flicking through Gardener’s World or Your Sinclair or something. (I normally hide Sinclair User in the pages of Playboy to avoid embarrassment – Ed) 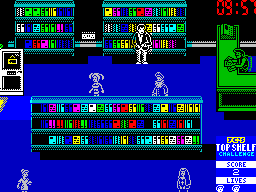 Come on Birdseye, clear off!

You also play as Jeremy Clarkson. Yes, this is called Jeremy Clarkson’s Top Gear – erm, I mean Shelf – Challenge for precisely that reason. Instead of browsing through Razzle you’re checking out the hotties standing next to a highly-polished supercar. Quite why the newsie frowns upon this is not explained, as it’s not 18-rated stuff. Perhaps the young Jeremy gets his cock out or something.

Anyway, once the coast is clear merely pressing a key is enough to whip What Car? Magazine off the shelf, and get an eyeful of the glamorous scantily-clad leggy blonde draped over the bonnet of a Ferrari, in glorious Chunk-o-vision. 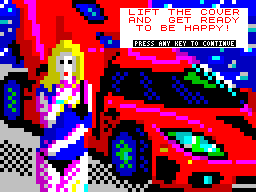 This girl is rather overdressed for the game.

Yes, it may be a bit of a shock, but Myke has gone for high colour chunky pixels comprising non-naked ladies, as opposed to the excessive higher definition albeit monochromatic everything-on-show visual feast of the original. As a result, even if everything was on show you wouldn’t be able to tell what it was that was being shown – it’s like Myke has employed Mary Whitehouse to pixellate the naughty bits and, of course, she’s determined the entire picture is objectionable. 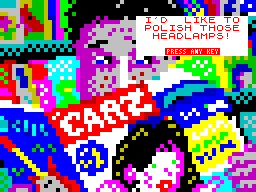 This is what you see if you activate “safe mode”. Filth!

Despite this, there’s even a “safer for work” mode. As an employee in a modern office, I can assure you that every desk these days is equipped with a ZX Spectrum. You wouldn’t want to get caught playing MykeP’s UDG Strip Snap, but this – oh, yes – it’s as office-friendly as you can get.

I’m not entirely convinced about the historical accuracy of this game. Jezza’s getting on a bit now, and it seems likely that he was well into his twenties by the time these cars were released. Also there’s a National Lottery logo on the door of the shop, which sets it in the 1990s at the earliest. 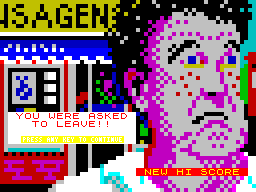 Get out of my shop!

Jeremy Clarkson’s Top Shelf Challenge is everything the original should have been, and less. The original worked, because it was a game that promised risqué content without the tedium of playing poker against Sam Fox. This improves the core game, but manages to remove the main reason why you’d want to play it.

Score: 1 nipple out of two (if you squint a bit)
Download: .tzx