Apparently UKIP’s perma-gurning leader, Nigel Farage, is a “man of the people”, because he’s always drinking pints of real ale in pubs. Well, I went to my local pub the other day and was charged £3.75 for a pint of Old Toejam’s Sweaty Bollock-Hair, so I can only assume the people Nigel Farage is a “man of” are people with lots and lots of money, or brewery bosses. If he was a true man of the people he’d be guzzling cheap Tesco lager like the rest of us plebs. Anyway, I digress – you’ll be pleased to hear that “our” Nige now has his own Speccy game! However for reasons known only to Sqij Towers’ Chris Young, he’s been re-imagined in this game as Nigella Farage. Judging her on looks alone, she’s certainly no Nigella Lawson: 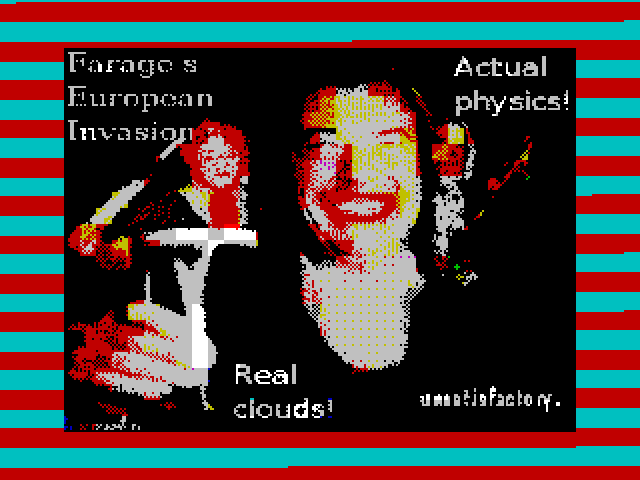 I can honestly say this is the most badly-rendered screen I’ve seen in my entire life. I assume the thing Nigella’s holding on the left is a pint of patriotism (to wash down the xenophobia-flavoured crisps), but beyond that I’m speechless! Well done Chris!

The game is even worse. Nigella Farage of the USNOOZ£ party (do you see what he did there?) has just become Prime Minister, and has made it her mission to kick out all those foreigners who keep trying to sneak into the country so they can lounge around on benefits at our expense while simultaneously taking all our jobs. To do this, she’ll lob pebbles at them on the shingle beaches of Kent in a Churchillian fashion until they go home. If all that stone-slinging gets too strenuous, a pint of beer will top up the energy levels. 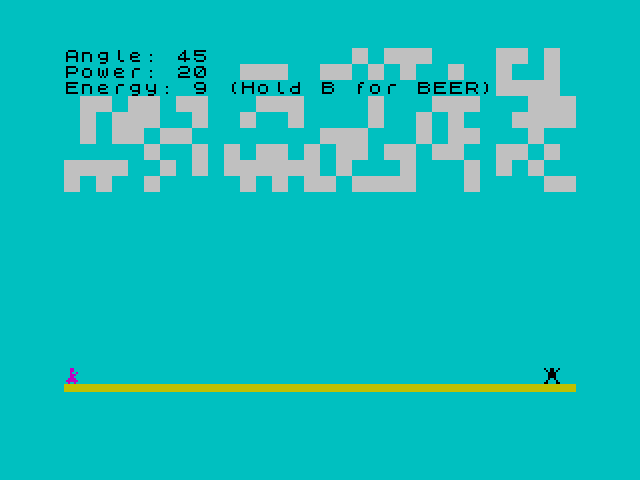 So that’s Nigella on the left (shouldn’t she be on the far right? Ed.), and there’s Johnny Foreigner over there. Shifty bugger, isn’t he? Funny-looking pixels. I don’t trust him. Kick ‘im aaaaaaaht! Set the angle and power, press Space to lob your weapon, and… missed by a mile. Rats! In fact there’s so much flickering going on that I couldn’t see the pebble at all until I cleaned my glasses. I try again, and again, and again (with the help of a couple of beers), and finally manage to wallop Monsieur İñtêrłøpèr who, contrary to the instructions, doesn’t go home, but dies. Bloody foreigners, coming over here, getting killed on our beaches before they can burn our villages and ravage our womenfolk.

That was a bit of a fluke, though – I played for another few minutes without hitting another Auslander, and ended up with a score of -15, at which point I can only assume the USNOOZ£ government identified me as a leftie pinko Communist hippy and kicked me aaaaaht! 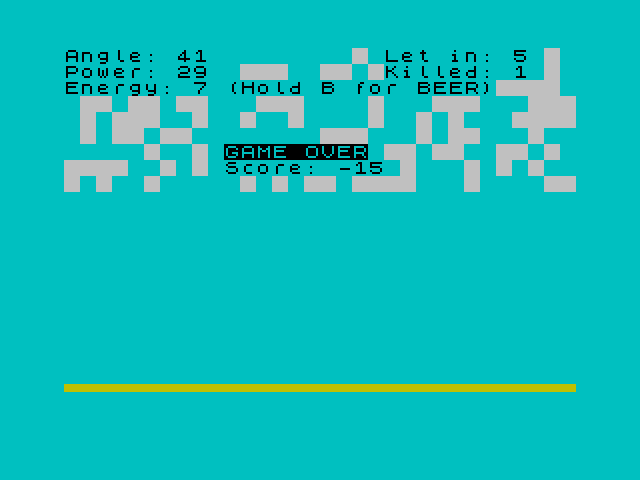 This game soon becomes unbearably tedious – a bit like Nigel himself – but at least it was made in Britain, on a British machine, by a British person, for the British, thus safeguarding British jobs for the next generation of British Britons in Britain!