it's crap! In a funky skillo sort of a way.
Myke-P
Crap Games

After confusing everyone with Fly Catcher – which had the look of a ZX81 game but that no-one seemed to be able to figure out how to play – PROSM is back with an actual ZX81 game which is moderately easier to fathom.

Shortly after submitting this game we received a follow up email in which PROSM admitted he’d left a line out of the program. Rather than attaching an amended .P file, however, we were advised how we could correct the omission ourselves; “before running the program, please insert the line: 90 RAND 0.”

Bug fixes and revised versions are generally frowned upon in CSSCGC as it is (under the assumption that a mistake or lack of attention to detail is a positive trait,) however, I think it’s a bold move to ask us to implement them! 😀

Of course I could’ve amended the .P file to issue a ‘corrected’ version – but why deny you the fun as well? 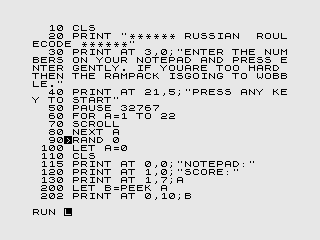 Load the .P file in EightyOne (or your choice of Zeddy Emulator) and, when it shows “0/0,” type the following: 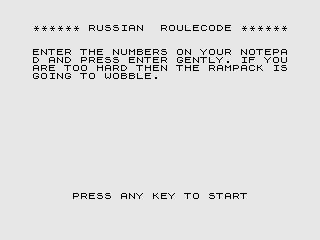 If you’re too hard? Oo-er Missus!

Congratulations! Our collective hard work has paid off; we can finally get to play the game as PROSM (henceforth known fully as ‘Peter Serafinowicz Obliterated My Sinclair’) intended.

It turns out that the RAM pack on a ZX81 was a little top heavy and prone to working loose from the Edge Connector during normal use – which usually resulted in a system reset and the loss of any data or, more critically, that program you just spent three hours typing!

In this tense simulation you are programming very own 3D Monster Maze-beater directly into the Zeddy as machine code. You’ve noted down each byte to enter on your notepad and all you need to do is type each decimal value in turn at the bottom of the screen.

There are only ten thousand or so to get through, however, the problem is that if you hit Enter* too hard then your RAM pack might wobble (or outright fall off) and you’ll lose the lot.

* or someone breathes too heavily, or opens a window, or a butterfly flaps its wings in Japan etc.. 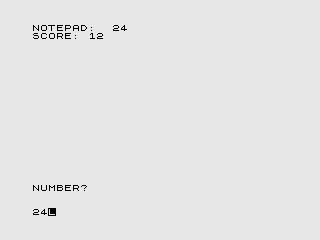 So, in a ‘gameplay’ style reminiscent of last year’s Ultimate ZX Spectrum Games Designer, you type your numbers and (gently) press Enter.

If you type the number correctly your score increases, if you type the number incorrectly your score is reset to 0 and you have to start from the beginning of the list. Alternatively, if the program deems you to be the heavy handed type, there’s a roughly one in 12 chance that your ZX81 will reboot each time you press the Enter key. Nailbiting stuff!

As I understand it PROSM is working on a sequel in which the in-game XP system reduces the chances of wobble over time by offering the user the likes of chewing gum, Blu-tack™ or Velcro® in order to try and secure the RAM pack in place.