Here’s a new (well, submitted on 15th October, but don’t tell anyone) game from WoS forum member Insert Coin, entitled Arcade Attacks! As a big fan of arcade games I have high hopes for this game. Let’s see how soon my hopes will be dashed, then… 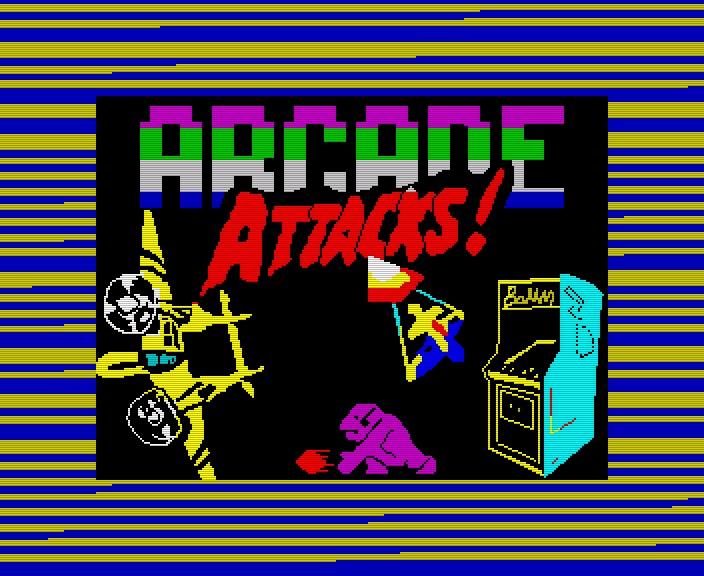 What a fantastic loading screen! This is far too professional for the CGC. I’m positively salivating during the short loading sequence. It won’t last… 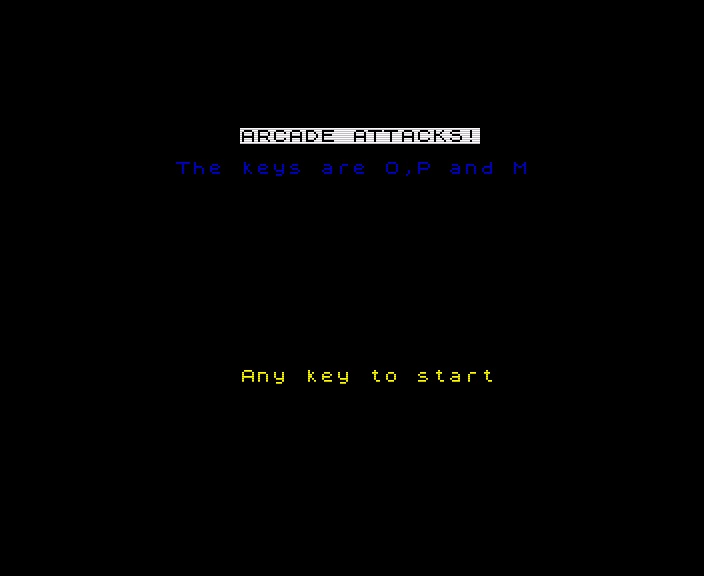 Yes, thankfully the whiff of general craptitude soon sets in with the title screen, with its bog standard Speccy font and minimalist instructions. Speaking of which, Mr. Coin has helpfully provided some more detailed instructions in the zip file to save me the bother of having to type too much, so here they are:

A dusty arcade console in a dark corner of an off-licence boots up, passes its ROM check and is now demanding more than just your money. After studying Galaxian A.I. over a number of years it has assembled firm plans on world domination by unleashing a torrent of fear on its screen. Your team, having co-incidentally just entered said off-licence, recognise the symptoms and offer to help the owner get it back under control. 15 minutes later, and having infiltrated the offending ROM’s sprite code (using the elusive red 48K Spectrum), you must take down 5 waves of baddies by firing character code 138s at raining cherries.

That’s what I like, a blurb that says everything and nothing at once. Just like the old days, when the back story to a game took longer to write than the game itself. 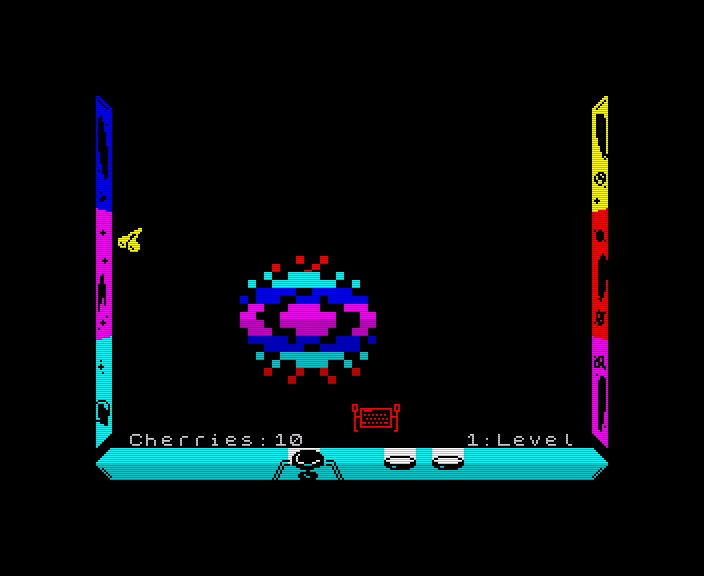 And here it is. You control the two teeny tiny stick men holding the normal-sized Spectrum, or the two normal-sized stick men holding the humungous Spectrum. You have to shoot character 138s at the cherries. I’m not sure what the eye thing is, but it doesn’t seem to do you as much harm as not shooting the cherries. What’s wrong with cherries anyway? Can’t it be dried apricots, or those horrible slimy Medjool dates that get passed around every Christmas and have the texture – and quite possibly the taste – of slug intestines? It’s not as if they would’ve had to be the same colour as real fruit in this game, given that the cherries you’re firing at are yellow. Mind you, I have a cherry tree in my back garden and the cherries do go yellow first, before turning red and getting eaten by birds (they’re welcome to them, they taste sour anyway). So perhaps Mr. Coin knows what he’s on about after all.

This game is clearly a load of old bobbins. On the other hand, as I’m stupidly busy at work at the moment and have about ten minutes a month in which to write reviews, I only played it a couple of times, so perhaps there’s a hidden level in which you have to do something other than fire ASCII characters at fruit. Somehow I doubt it though. About time I finished this review really so I can take another six weeks procrastinating over the next one, by which time it’ll be January and nobody will care any more.