it's crap! In a funky skillo sort of a way.
SotaventoColheres
Crap Games
3 Comments

Here is first the game of crap entry from the António Silva, and by Jehovah it is the crap. Everyone have been playinged the Rocks, Papers, Scissor, but ever have you been played it in both of the English and Portuguese all at same of time? Nope, neither me.

I do be saying “English”, but is more like the Manuel from Fawlty Towers English, which English is not at all really. Although way it is better still than is my Portuguese – and must I be admitting I thought in Spanish was game at the first. 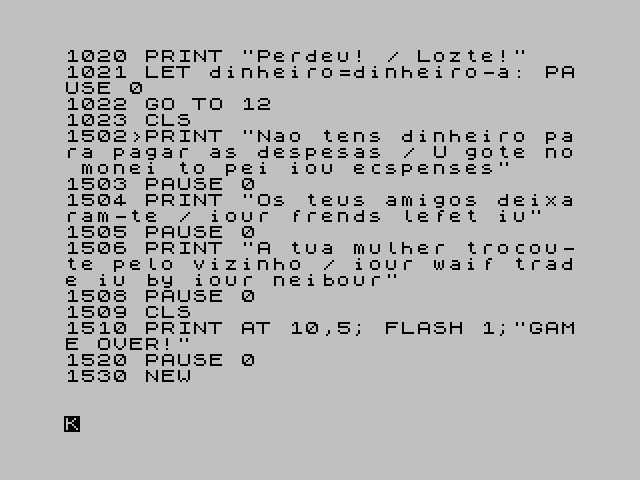 As this is shot of snaps file, game he does not start immediate run – meaning you have of the BASIC listing to see! So to be start, type the RUN button. After bi-menu lingual, navigating, am asked I “quanto quer apostar?” with the numbero FLASHing, and the beneath choices of the papper, csissores, and of the rokc, thus: 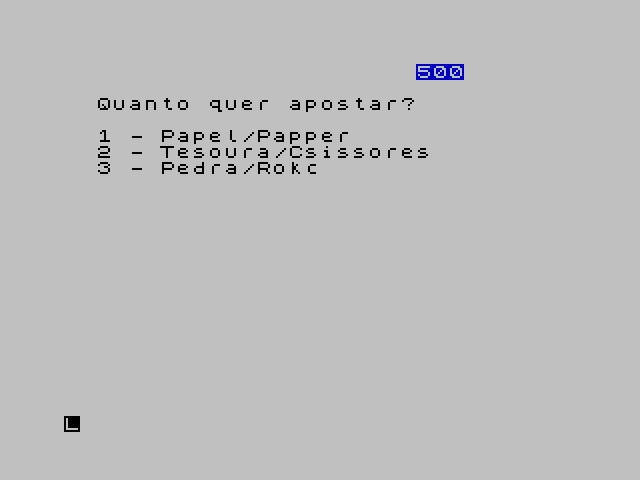 One does be assumed this numbero is of the cash moneys which is allowing to be gamblinged. Hmmm… chooses I paper, the scissor, or stone? This is one of the tough. I could the rock be choosing, as that blunted would be becoming of the shears, but might not it get wrapped by the papyrus, yes?! Right, I’ll chosen the parchment. But if it get cuts by the secateurs? Okay, these in the stead I will be of choosing… but about what, of the pebble? Oh, I really know not. Permit us some psychologicals reversed to try, I calculate the computator expecting me will be to choose the boulder, so if I go for the two knifes, it will blunt the wooden thin sheet… or will the cardboard wrapping be to of the clippers… oh copulate it… trimmers of hedge it is… hey, I am of winnering! Well, “ganhou” I have been doing anyway, whatever it is meaning. Having a feel-up of the confidence, I try throwing more cash moneys again of paper this time… now I have “empatou” which is the same meaning as when you draw, like in the footyball when teams they get the number of same goals. This is joke of great funnitude, because the “paper” is what you do be “draw” on, yes? Hohohohohohohoho! 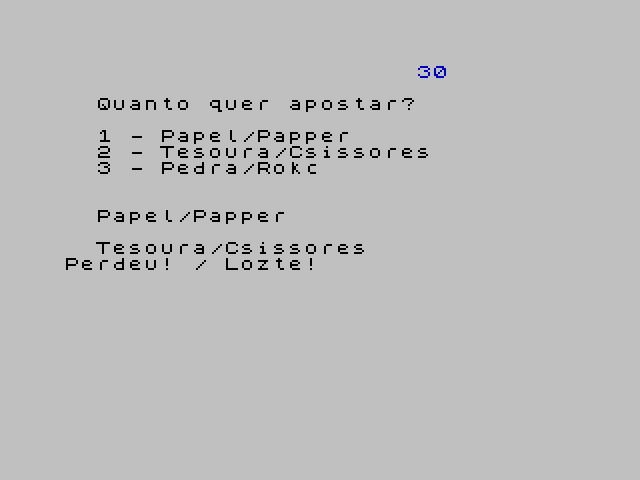 Everhow, my final moneys I try to gamble all, but oh big plums! All my money did be spunked away, or as game he says in of the English, “U gote no monei to pei iou ecspenses”. Worse it gets, do all my comrades running from me away, my husbandess she with my next-door man elopement, and all of the worst, the Speccy of mine is resetted! Waaaaah! No is fair!

Score: hundred of the one percent.

Download the game can be done here (shot of snap file).