Another Simon Ferré effort, and at least this time he’s bothered to include a game. Despite the name, Where’s Wally isn’t the long-awaited follow-up to the last Wally Week title, Three Weeks In Paradise. Instead it’s (loosely) based on Martin Handford’s books of the same name, in which you have to find the bespectacled, behatted, bestripey-bejumpered Wally. Curiously Wally has different names in different languages (Waldo in North America, Charlie in France) so perhaps with a bit of tweaking Simon could, if you’ll allow me to lapse into corporate bollockspeak for a moment, “leverage the game’s multi-territory excremence value going forward”. I particularly look forward to the Norwegian version, Where’s Willy?

It starts well, with a FULLY ANIMATED loading screen, an astounding feat of programming skill that would have made the creators of the Moon Strike loader weep with rage if it had come out in 1988:

Hypnotic, isn’t it? In fact I’m guessing you’re all still looking at it right now, so I might as well write any old shite in this paragraph, just to pad out the review. Ultimate Play The Game were a rubbish software house. Glenn Medeiros was the greatest singer of the 1980s. The Commodore 64 is the best computer ever made.

Ahem. Now I’ve got that out of my system, let’s take a look at the game. Simon very helpfully hasn’t given any instructions, so after pressing a key you’re left to work proceedings out for yourself. Luckily Simon’s gone for the traditional key option of Q, A, O, P and Space – although U, D, L, R, F would’ve gained him more crap points! The game is pretty self-explanatory – you have to find Wally in a sea of stripy-jumpered people. Wally and his friends look very similar, comprising of a head (with no hat or glasses), a pair of stubby little legs, and the stripy jumper, which comes in a multitude of randomly-generated colours. Rather disturbingly Simon has forgotten to draw arms on his Wallies, which makes me wonder what they all do for a living when they’re not loafing about in a Spectrum game. Perhaps they take it in turns as Def Leppard’s drummer. 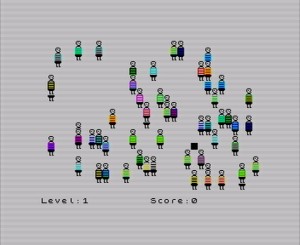 In an amazing feat of detection I worked out how to play the game almost straight away – you move your cursor around and highlight the correct Wally. Just to make it clear, the chap you’re looking for is the original Wally, who looks something like this (Microsoft Paint hasn’t been kind to him, but you get the idea)

The game is pretty tough at first. Choose the wrong Wally – and there are a few stripy red herrings thrown in there – and it’s Game Over, which made me wonder if Simon Ferré used to work for Dinamic. However I pretty soon worked out how to find him – I won’t completely spoil the fun for the rest of you, but if you stare at the screen without blinking you might get the idea…

And if you’re still not convinced by this game’s charms, there’s a snapshot available to download. In the author’s own words, “I was utterly captivated by this game and lost all sense of time while scouring the screen looking for Wally, and all I can say is that eventually I decided to give up after a whopping 109 score, as you can see from the snapshot I have provided.  Let us see if anyone can beat this.”

I must admit after about 3 goes I was more bored than my kids on a wet Sunday afternoon in November during a power cut – but if you’re the sort of person who has far too much time on their hands, 109 is the score to beat!