it's crap! In a funky skillo sort of a way.
leespoons
Crap Games

Another game from sunteam, who seems to be going for the record number of games submitted in a year which is currently held by… checks old threads on WoS… phew, it’s not me.

This time he’s very thoughtfully remade the classic arcade shooter R-Type for the enjoyment of blind and partially sighted people. This may seem a bit tasteless to some, but I think it’s a nice thing to do. Crap Spectrum games should be enjoyed by everyone, not just those with 20-20 vision!

It’s another .dsk image – boooo! – but at least this time it makes use of the 128k machine’s PLAY command, so don’t try loading the converted tap on a 48k machine unless you like seeing the C Nonsense in BASIC error. Although you won’t notice if you’re blind, of course.

Oddly the first line of the game contains a REM statement with the title R-TYPE FOR THE DEAF. I can only assume this was sunteam’s original idea, before he realised that a version of R-Type with no sound already exists. It’s called R-Type.

I must admit I was expecting this to be a lazy one-line program along the lines of 10 BORDER 0: PAPER 0: INK 0: CLS: GOTO 10 – but all credit to the programmer, a quick delve into the BASIC reveals he’s actually written a playable game here! Following the now-customary bleeps and bloops, a menu appears (sadly not in Braille) 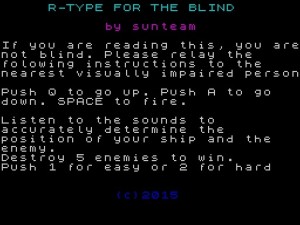 Ah, now that’s clever. The game follows the “fly about and shoot stuff” narrative of R-Type, but with one crucial difference – with no graphics, it’s down to your ears to interpret what’s going on in the game. This could well be the perfect game for large-lugholed Sir Clive Sinclair impersonator, Alexander Armstrong.

On selecting your level you hear another short tune followed by a series of steady beeps. Press up (Q) and the pitch of the beeps decreases, down (A) and the beeps get higher in pitch. Which is a tad confusing, but no more so than those flight simulators back in the day that required you to press down to fly up and vice versa, because of nosecone mechanics or something. After a while the beeps start to alternate with some differently-pitched beeps – this means the enemy has appeared! So if you can get your beeps in the same pitch as the enemy’s by flying up or down, then you can get a pot-shot at them. Confused? This screenshot of the game might help: 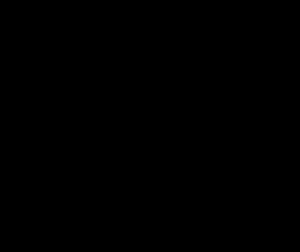 Being a musical chap whose one and only talent is having perfect pitch, I actually quite enjoyed this – the lack of graphics didn’t stop me from winning the game on my very first go. Or at least that’s what I gathered from the bleepy tune I heard before being dumped back to the main menu. I wonder if with a bit of polish and perhaps the odd speech sample via a Currah interface it’d be a genuinely playable game – I hope this doesn’t mean sunteam is losing his crap touch!