MatGubbins is back with his second Keyword Challenge entry; CLINT AND DA CRABS, and once again, sneaks in a second (LOAD CLINT & CRABS CODE) to load in a large block of data.

MatG clearly has ideas above his station – give him a month or so and he’ll be doing Alcatraz loading screen$ and 128K AY music! Let’s hope the game itself was at least programmed with the assistance of Andrew Green’s UZXSGD?

More Chunk-o-vision™ graphics, starting with that PRINT-based ‘loader,’ are included but this time they’re in glorious Color-o-matic™.

After a good 2½ minutes of screeching the instructions appear and, well, it doesn’t look good for our Clint – he’s stranded on a beach and about to be attacked by a giant crab*!

* Anyone who’s been to the Blackpool Sealife museum knows how scary that can be!

Not much more to see here (except some scores and keyboard controls) so it’s on to the game.

Look at those keys!? My fingers hurt already

It’s good to see MatG’s use of machine code hasn’t descended into complete madness – he’s stuck with solid UDGs, rather than sprites, moving in comfortable 8×8 block jumps and PRINT statements throughout.

Clint, who also appeared (uncredited) in Return Ink to Move Cat In To A Bin, begins at the top of the screen. Scattered around him are what – I think – are rocks (although they could be turds – Ed.) Coupled with a yellow background and blue border I’d say that passes for a beach. Nicely done.

A red UDG, representing the titular crab(s) (You’ll want to see a doctor about that – Ed,) appears at the bottom of the screen and… SH*T!… it’s heading right for me… FAST!

There’s not much to the AI in this game, the crab just heads towards you in the straightest line possible, and if you move it blindly follows you… FAST!

Luckily you can use this to your advantage as, if you skillfully place yourself behind a rock, you can cause the crab to crash and disappear in a puff of magenta smoke.

Unluckily, however, he’s got friends and very quickly you find yourself being chased by loads of the terrifying little blighters! 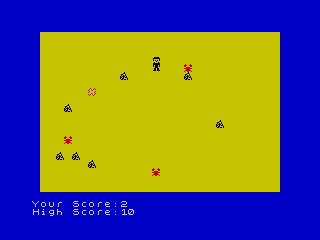 Run for your life or you’ll get crabs, or something…

Unfortunately, in his machine code experiments, Mat hasn’t got to the stage where he can muster a decent control system.

Instead we’re left with a cramp-inducing 8 (eight!) directional keys, for which I couldn’t find a comfortable or logical way to position my fingers over simultaneously, meaning I was at an immediate disadvantage against my creepy little pursuers and got to see this screen – a lot! 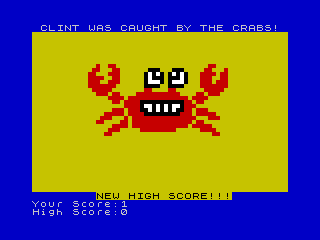 What a chirpy looking Crustacean!

I found this to be a genuinely heart-pounding and traumatic ‘gameplay’ experience as I tried in vain to avoid the crabs while my intertwined barman’s hands ached more with every passing second.

Perhaps you’ll do better and, to be fair, I managed a high score of 10 (Challenge set – Ed) by pure luck in one sitting but, overall, I can’t recommend this game.

MatG’s choice of filename interested me; “clint48only” – suggesting that this only runs on a 48K Speccy? I fired up Fuse in 128K mode and used the Tape Loader and, sure enough, it crashed spectacularly with a B Integer out of range error. Thanks for the warning Mr Gubbins!

MatGubbins gets straight into the Keyword Challenge with a 9-byter and then, immediately, follows it up with a second!

I’ve no idea if the challenge rules can even cope with that kind of out there thinking, but you have to admire the kid’s spirit. 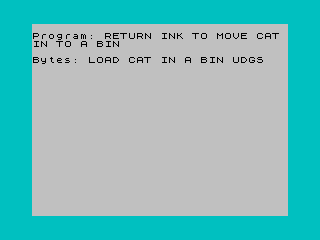 Bonus points from the off!

A short load later and we’re presented with a marvellous title screen, in glorious chunk-o-vision™, and a colourful ‘press space to start’ prompt – the likes of which haven’t been seen since last year’s Run Ferrit.

There’s also a quick plug for some game or other, however, if this crap is anything to go by I wouldn’t give it a second thought.

Onto the game itself and it’s a master class in literal titular interpretation. (F’nar – Ed)

You play Mr Fluffykins whose cat, Steve, is perched upon a fence at the bottom of the screen. A randomly placed… sack… of ink, inexplicably marked ‘Q,’ is placed somewhere on the screen and your job is to locate it, move towards it (using the predefined, but comfortably traditional, QAOP) and pick it up. 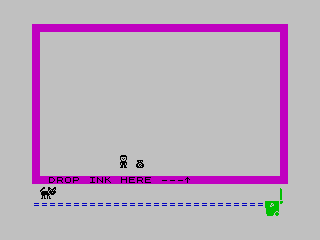 Once in possession of the ink you need to – carefully – manoeuvre Mr Fluffykins towards the bottom of the screen. BUT BEWARE! Move too quickly and the ink will spill all over your nice clean shoes! (Possibly – Ed)

Deposit the ink into the signposted area and Steve will slink forward a little, all the time seduced by the sweet smell of rotting fish coming from the Wheelie Bin® at the far right of the screen.

HANG ON! You’re not finished by a long shot! Another bag of ink appears. CAN YOU RESIST?!? 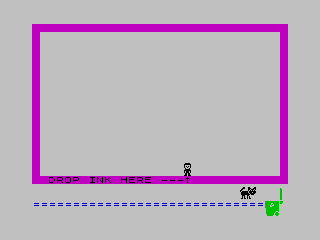 Unfortunately Mr Gubbins has fluffed up again, this time managing not only to produce a more-or-less playable game, but also including some great UDGs while he’s at it.

I won’t spoil the ending for you – I think you’ve had more than enough excitement for one review – but MatG does leave it open for the sequel; RETURN PAPER TO BIN TO LET CAT OUT!

Note: No animals, apart from Steve who injured his paw when he slipped on the fence at one point, were harmed in the making of this review. This review may contains elements that have been created or exaggerated for dramatic effect.