I’m having horrendous trouble with my home broadband at the moment, to the point where I can see the piles of crap games clogging up my inbox, but I can’t log in to my website to review them (other than via the WordPress app for Android, which with my fat fingers is like using an elephant with a sledgehammer to crack a nut for a squirrel). The upshot of this is until my connection gets sorted next week, I can only review games sporadically via a process of Notepad++ files, screenshots saved onto USB sticks and sneakily-grabbed moments at work. I’d already planned to spend the first seven hours and twenty-nine minutes of my first day back after the Easter break reviewing Myke-P’s Grand Prix 2015, before realising that Chris had already nabbed it. So I move to the next game on the list, once again by Simon Ferré, who must think I’m his own personal review butler by now. And once again, there’s a fully animated (and rather cleverly-done) loading screen!

If I was being paid to review this game, I’d include the following marketing blurb from Simon’s email: “This imaginatively titled game will have you in total awe of the sheer brilliance of word play, smooth animated sprite control and real time drawing, complete with near interrupt-driven background sound, familiar controls, beautiful full-colour sprites, immersive game play and built in game level increase, not to mention fully animated loading screen.  There is also a custom designed screen font, clear screen effect, animated game over text and two types of enemy movement.” However, the original placeholder text I typed, to stop somebody else nabbing the game, was “Lorem ipsum wibble goats-cheese aardvark teapot helicopter jockstrap Yehudi Menuin” – it would probably be doing Simon an injustice to leave it at that, but it’s very tempting. 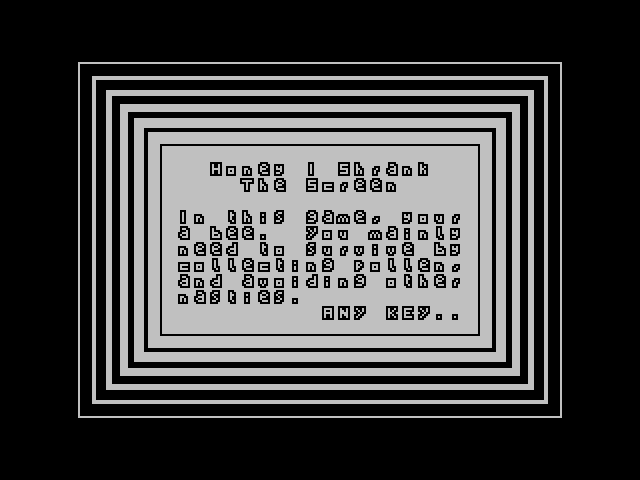 “In this game, your a bee”. My a bee what? Clearly Simon has succumbed to some form of Muphry’s Law here – only three days ago he pointed out a double “the” in one of my reviews, and now he’s made an grammatarical errer off he’s owen! As the title suggests, it’s a tiny little screen, and another near-illegible font – not quite Arabic, but still high on the squint-o-meter. There’s also a beepy little riff in an odd time signature (9/8 or something) which sounds a bit like a tone-deaf version of psychedelic prog-rockers (much listened to in my corner of Sqij Towers), Ozric Tentacles, if they’d had Spectrums instead of proper synths. And the screen-clearing routine is reminiscent of Horace Goes Skiing (only with more beeps) – a nice touch. Well, it’s a highlight, anyway. 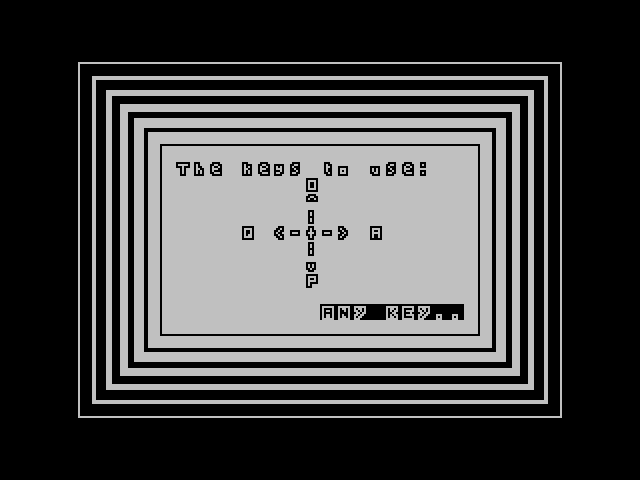 At least the keys are sensible. Well, except that Q and A control left and right, and O and P are up and down! Perhaps all those 12-year-old WASD fanatics were right after all.

Anyway, this game can best be described as a bimble-em-up. You bimble around the screen, collecting honey and avoiding caterpillars and butterflies. Immediately this throws up far more questions than it does answers:

Answers on a postcard to Sqij Towers. 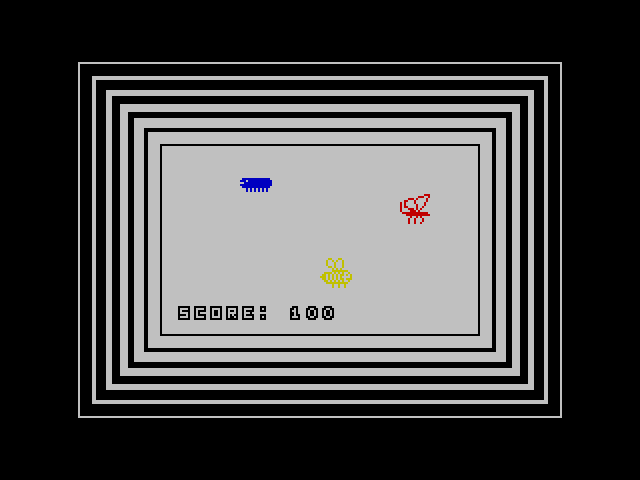 This is Simon’s first proper arcade game entry, and it certainly shows. What makes this game unplayable isn’t so much the topsy-turvy controls, but the sheer sloth of the thing – in part due to the aforementioned psychedelic 9/8 tune which continues to play throughout the game (even adding 8001 RETURN only speeds it up slightly). And you only get one measly life. On the other hand, as with all the best crap games, I get the hint of a good – or at least well thought-out – game. But on the other hand (how many hands have you got? Ed.) I didn’t want to play it more than once – in fact you could say it brought me out in hives! (the last sentence was sponsored by Bad Dad Jokes ‘R’ Us. You can stop laughing now.)

Simon said in his email “If this doesn’t win the competition, I don’t know what will.” Be careful what you wish for, Simon!