Chris Young seems to think that his ridiculous 1999 entry, 1D Tetris, would be improved by adding a boy band to the mix. One Direction, for you lucky people who have lived in a cave since 2010, work in the finance department of a large record company, extracting large sums of money from nine-year-olds and their gullible parents, and passing most of it to Simon Cowell, in exchange for music which, if it had come out in 1989, even the likes of Big Fun and Yell would’ve called “a bit rubbish”. The perfect band for a crap game, then. 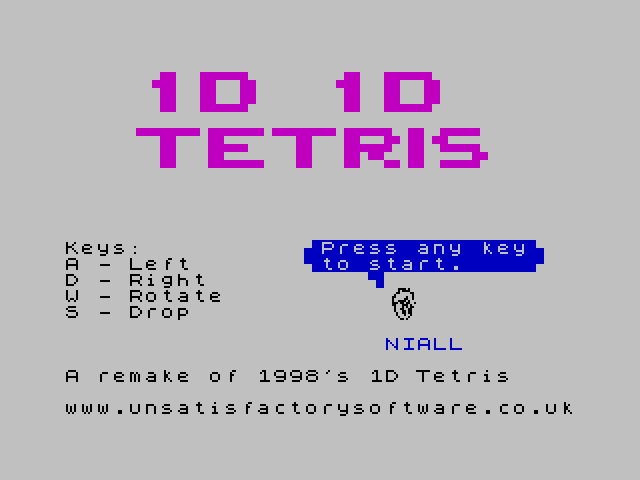 Now it hasn’t escaped my attention that every time I mention I don’t like something in a review, some bastard includes it in their next game. Perhaps I’ll try a bit of reverse psychology; I really don’t like looking at women with their clothes off*. Anyway, it’s the bloody WASD keys which have set off my irk-o-meter again this time. What’s wrong with good old fashioned QAOP, and proper music made by proper musicians on proper musical instruments, and I remember when you could leave your door open all day and all this was fields and jumpers for goalposts and you could get a pint of hand shandy and a pickled egg surprise for two-and-six down at the docks on a Wednesday afternoon… Nurse? Nurse?! 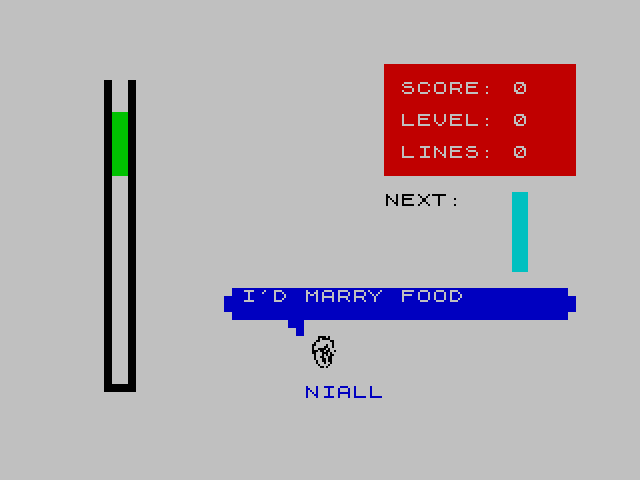 Not that it matters about the keys, as it’s 1D Tetris you can’t move the bloody blocks anyway. Just hold down S and your score whizzes up faster than you can say “Whatever happened to One True Voice?”. But look at what Chris has done to poor Niall? Either he’s mashed his face in with a toffee hammer and he really looks like that, or this is the worst pixellated celebrity rendering since the loading screen for Peter Beardsley’s International Football. He might well want to “marry food”, but even a plate of tripe and onions would probably stand him up on the first date. 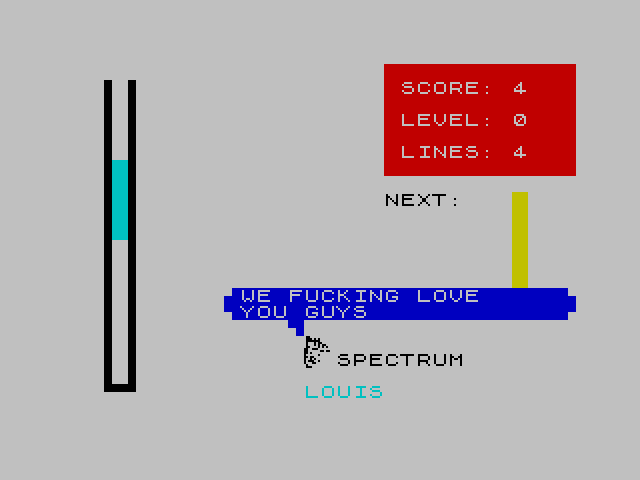 It’s Louis! Or is it a teddy bear with leprosy? Hard to tell, I was running the emulator in 128 mode meaning one of the components of Louis’ “face” has been replaced by the SPECTRUM keyword, which amusingly stays on the screen for the rest of the game. 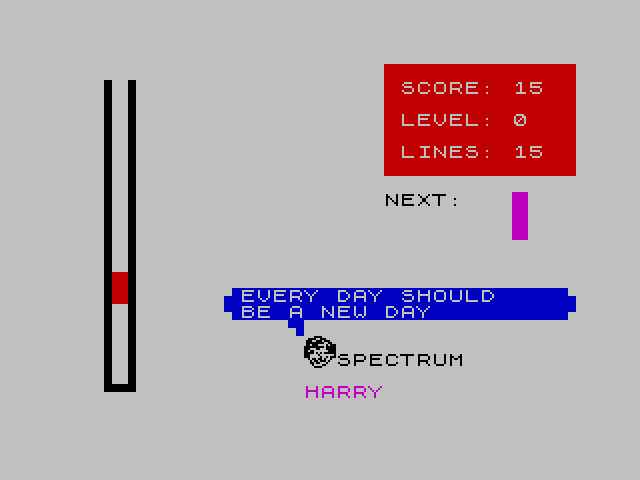 Now Harry doesn’t mind if he doesn’t make the scene. He’s got a daytime job (as a potato, or a meteorite, or a pile of dung), he’s doing alright. 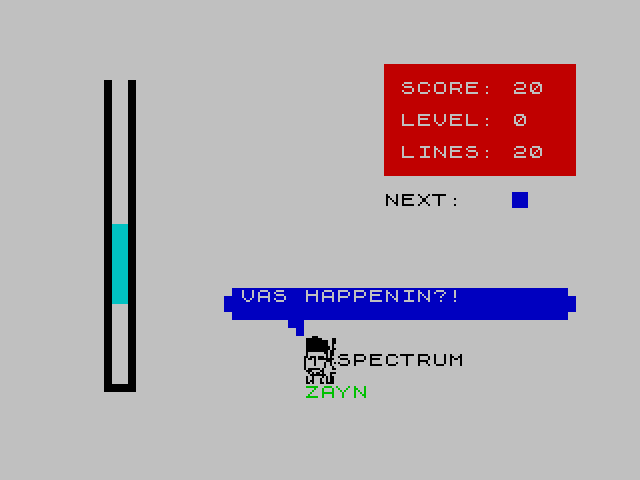 It’s good to see Chris has his finger on the pulse too, as Zayn left the band back in March this year. Not sure vhy he is haffink ze fake Tscherman accent eizher, but at least he looks recognisably human. He seems to be holding some sort of walkie-talkie too – perhaps he’s the band’s security guard now?

If you’re a fan of the fifth member of One Direction – and I’ve completely forgotten his name, but in the tradition of Smash Hits magazine circa 1988 I shall call him “Ken” – then I’m sorry to disappoint you but I gave up at this point and hurled my laptop off the top floor of a multi-storey car park, closely followed by myself. So you’ll just have to play the game to find out what atrocities Chris has done to Ken’s face.

I say “play the game”. You don’t actually need to do anything. It’s 1D Tetris, you fool! You can’t lose! The perfect crap game for crap gamers and crap fans of crap boy bands! Crap!

Score: No. 37 in the charts for one week, followed by obscurity.

*They don’t much like it when I put their clothes on again, either.