Social meeeeedjaaaaaa has been ablaze lately with talk of a game entitled Bloodborne, which sounds like the name of one of those odd villages in the wilds of Kent where people still point at passing cars and eat roadkill sandwiches for breakfast, even though they’re less than an hour from London on the train. However, it turns out it’s a realistic first person gore-em-up where you have to go round killing stuff. Now I have no problem with virtual murder (provided it stays virtual), but as my knowledge of video games spans the years 1980-1989 and then stops, the closest I ever came to first-person genocide was running over pedestrians in the pixel-tastic but utterly unrealistic Turbo Esprit. Years later I borrowed a mate’s Dreamcast to play Shenmue, but even that was more of a beat-em-up with occasional forays into fork lift truck driving, looking after a kitten and trying to decipher this guy’s accent (Jamaican? Geordie? North East Betelgeusian? Answers on a postcard…)

So having never played Bloodborne or any remotely similar games (I even think of Doom as a relatively new invention), I’m obviously the ideal person to review Chris Young‘s derivative game, with the lawyer-defying title of Bloodlust. I even asked the Sqij team if anyone would like first crack at the review, but was met with stony silence from all but the game’s author, who helpfully pointed me to this review on Digitiser. I then contemplated copying the Digitiser review word for word, because only about three people other than the residents of Sqij Towers are reading this anyway. But, erm, I didn’t.

Bloodlust, then. There’s a pretty impressive yet pointless loading sequence featuring the Unsatisfactory logo and a Chunk-O-Vision™©®@℗ copyright message – looks like MatGubbins will be getting some royalties if anyone buys this! And following a gory loading screen and some guff about having to create an account, a menu appears in which you get to design the character which presumably will be playing the game. The default setting – the “Steve”, if you’re a Minecraft player – is this chap: 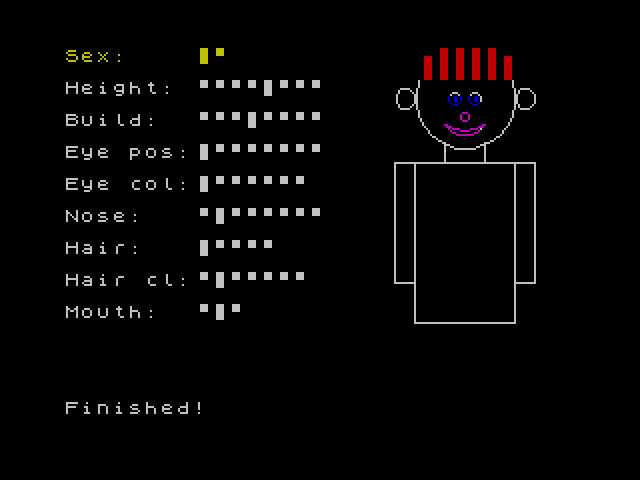 The bars to the right of each category represent changes you can make to your character. I spent a thoroughly enjoyable ten minutes fiddling with each option (once I’d sped up my emulator) and – having had a good schoolboy giggle at at “cup size” – came up with my ideal woman. And here she is – hubba hubba! 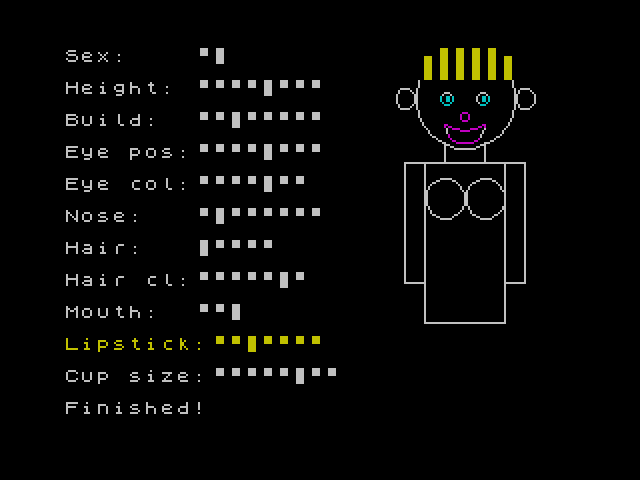 Well not quite my ideal woman – when I tried to give her long hair, her eyes turned yellow. I would’ve liked her hair a shade darker too – so let’s hope there’s a C64 version!

Once I’d finished fannying about (was that an option too?! Ed.) I started the game, and… well, I don’t want to completely spoil the surprise, but just like Bloodborne itself, there’s a lot of killing in this game… I’ll say no more!